Chitose Abe's ethos has always had an idealistic bent, but this collection's futurist folklore communicated a hopeful unity that goes beyond politics. 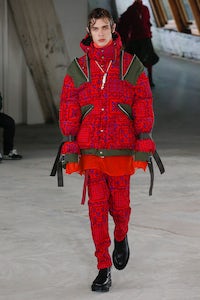 Chitose Abe's ethos has always had an idealistic bent, but this collection's futurist folklore communicated a hopeful unity that goes beyond politics.

PARIS, France — It’s the nature of hybrid forms to defy definition. Chitose Abe has built Sacai into an indefinable delight with her fashion hybrids. “Riffing on togetherness”: that’s her brand’s realness. So it made sense that, when she shows men’s and women’s collections together, as she did on Saturday, they would draw on exactly the same elements.

The message in that umbilical connection is particularly strong at the moment. Abe’s fashion ethos has always had an idealistic bent. Remember “Love Will Save the Day”? Here, she reproduced on tees and hoodies the New York Times’ manifesto: "Truth. It’s more important now than ever." Politics aside, Abe sees truth in harmony and acceptance of the multi-faceted variety of others. And if such notions, plus her natural exuberance, suggest a heart of lovey-dovey hippie-dippiness, then all power to her, especially when she produces — as she did on Saturday — clothes that had the gutsy authenticity of futurist folklore.

It came from several directions. Abe reproduced patterns from Hawaiian print specialists Reyn Spooner. She combined classic but clashing ideas like pinstripes and fairisles, or Nordic knits and camo. And she trimmed the collection with thick clusters of fringe. Abe inserted zips everywhere, to open and close the clothes at random, in the same way that she shrank and expanded pieces, then layered them to create new silhouettes. The top half was substantial. For the men, the bottom half meant shorts over leggings (like Kim Jones showed at Vuitton). For the women, it was dropped waists flaring into full skirts. Either way, the keynote of the collection was movement, dynamic, aggressive even. And if that doesn’t sound particularly harmonious, there was such unity in the clothes Abe offered on the catwalk that you could draw hope from the power of Sacai’s most singular truth: stick to your beliefs.