With his latest men’s show for the Kering-owned brand, artistic director Anthony Vaccarello made decisive progress in laying out a menswear vision distinct from his predecessor Hedi Slimane. 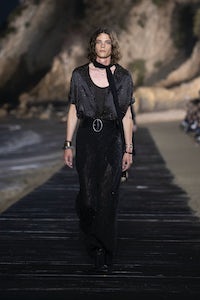 With his latest men’s show for the Kering-owned brand, artistic director Anthony Vaccarello made decisive progress in laying out a menswear vision distinct from his predecessor Hedi Slimane.

LOS ANGELES, United States — These days, fashion is more about brand experience and storytelling than clothes, which most of the time are not as exciting as their packaging. The past month of traveling shows was a study in showmanship over clothes-making. But it certainly resulted in some highly entertaining and memorable shows.

For his second fully-fledged Saint Laurent menswear outing, artistic director Anthony Vaccarello went all the way from Paris to Malibu’s Paradise Cove, outside Los Angeles. There are certainly many similarly charming beaches surrounded by rocky cliffs on which to lay a boardwalk-cum-catwalk — painted black, of course, as Vaccarello is a die-hard believer in the "all black everything" philosophy — on which to stage a parade of lanky, ambiguous guys walking in dance shoes at sunset. But few could compete with the City of Angels in terms of narrative angle.

The mystique of the city, with its laid-back, esoteric charm is unbeatable, and Vaccarello was after just that. “I wanted a new Marrakech,” he said backstage. “The real Marrakech has completely lost its charm, but I think LA has a similar energy. It is a place with no history and no rules that's run by a free spirit, a city that is almost disconnected from the rest of the world and in which one can totally disconnect.”

The thinking behind the endeavour was clear and agreeable. It’s all about the context, you know — and the right context can reverberate on the clothes. Thereafter, the trip to the far-flung West Coast made sense. Though the LA-Marrakech comparison sounded a tad forced, it also made sense, lending a palpable allure to a collection that, although not ground-breaking, marked some decisive progress in Vaccarello’s vision for Saint Laurent menswear.

Vaccarello, who before Saint Laurent had no menswear experience, has had quite a hard time finding his voice in men’s, quite the contrary to his womenswear, where his stamp came quickly. His first men's show last year, and the smattering of men's looks in his women's shows, owed a clear debt to his predecessor Hedi Slimane's brand of skinny tailoring and sartorial sleaze. The shrunken blazers, cropped tailcoats, stovepipe jeans and mod-inflected agility offered too much continuity.

There was still some of that in yesterday’s show, but it was not what commanded the most attention. A lot more interesting, and personal, were the embroidered caftans, billowing harem pants, tunics and slightly effeminate sparkle that reflected Vaccarello's take on the bohemian streak in YSL’s DNA: the opium-drenched, sleazy style Monsieur Yves adopted in Marrakech.

Although respectful of the heritage, this was not an exercise in nostalgia. Adding references to Mick Jagger’s highly effeminate looks, circa 1975 — Vaccarello is working on the stage wardrobe for the next Rolling Stones tour, so Mick Jagger allowed him access to his own vintage pieces — the designer delivered a study in gender ambiguity that felt relevant.

Sure, the look had something that was perhaps too literally Seventies, but it did not feel nostalgic or blatantly derivative. Vaccarello is speaking to a generation too young to even remember that moment in real life, but certainly enthralled by the lasting iconography, discovered online. He makes the rock star dream attainable, all the while highlighting the senselessness of traditional gender divides.