The show was another hit for Paul Andrew and Guillaume Meilland. A tad too precise at times, but assured. 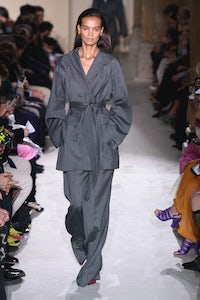 The show was another hit for Paul Andrew and Guillaume Meilland. A tad too precise at times, but assured.

MILAN, Italy — Ferragamo is using patchwork, with the colorful implication of craft that it evokes, as a symbol of inclusivity. It's a fitting one, all things considered. The historic Italian brand has a lot of patchwork pieces in its extensive archive, thanks to the wonderful oeuvre of founder Salvatore Ferragamo. And it has recently taken to describing its advertising campaigns as "patchworks of characters" with diverse casts of all ages and races, a narrative that's increasingly common in fashion nowadays.

There was a lot of patchwork in Saturday's show, which was held in a new location — the Rotonda della Besana, where some seminal '70s and '80s fashion shows took place — that felt spacious and enlivening.

The patchwork was literal — beautiful inlays of leathers in warm and rich notes — as well as metaphorical, thanks to a diverse cast of models. There were a lot of '80s references going on, too: slouchy and chic ones, a contrast to the tackiness that's pervading the fashionscape right now. Think Sloane Rangers in louche deerskin robes and humongous parkas, dynamic ladies in printed silk dresses or leather jumpsuits and their beaus in leather anoraks, deerskin pajamas and sturdy suits.

Indeed, there was a lot of product variety in the show. What kept it together was the precision of the stylistic vision and the immaculate execution. This was another hit for Paul Andrew, the brand's newly promoted creative director, and Guillaume Meilland, its men's design director. The new course of Ferragamo is set, and looks very good. A tad too precise at times, but assured.