A tighter edit would have helped, but there were also highlights which underscored an interesting tension between control and abandon. 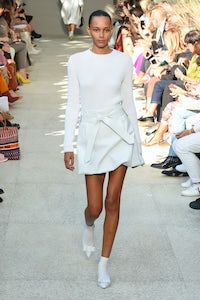 A tighter edit would have helped, but there were also highlights which underscored an interesting tension between control and abandon.

MILAN, Italy — Joyful living was the byword for Paul Andrew at Salvatore Ferragamo this season. The en plein air, slightly bucolic show setting in the courtyard of the Rotonda della Besana certainly helped convey a joyous feeling. The balmy weather helped too. The collection did the rest: starting in total white and ending in total black, it was an airy excursus through roomy shapes, refreshing colours and ease of dressing.

There were some missteps — the clumsy dungarees won't have much life past the catwalk, give or take the occasional influencer — and a tighter edit would have helped, but there were also highlights which pointed in an interesting direction, one that was slightly more sensual than in the recent past. The devoré velvet dresses felt deliciously feminine, while the tailored pieces opened in the back, and though they probably weren’t very easy to wear, underscored an interesting tension between control and abandon.

There was a lot of skin on show, including in the beautiful leathers that are a Ferragamo signature. Semi-nakedness made for an interesting addition to the typically restrained Ferragamo ethos. Accessorised with a new, edgy take on the bourgeois Vara flat as well as dynamic new bags, it made for a convincing outing.