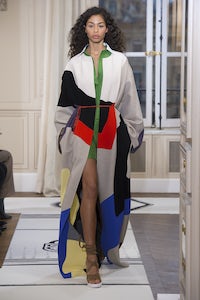 PARIS, France — N°21 Place Vendome is a legendary address, and the seasonal walk through its salons before and after each Schiaparelli haute couture show is one positively soaked in Paris fashion history. From Jean Michel Frank’s furnishings to illustrations by Berard and that Marcel Vertes triptych screen, the surroundings are a magical reminder of Elsa’s unflinching dedication to artistic collaboration and her dreamlike wunderkammer of surrealist ideas. With such a patrimony intact, it begs the question why designer Bertrand Guyon collected his Spring/Summer 2018 show inspirations under the banner of “pagan goddesses,” a sweeping generalization of disparate themes that boiled down to a playoff of classical European and tribal African references. It did his beautifully-made haute couture designs few favours.

With a recent daywear push, Guyon’s designs have come to comprise of much more than a Schiap jacket and a shocking pink gown, however today’s iterations proved those to be some of the finer points of a schizophrenic collection heavy with incongruous craft references that drowned models in raffia, patchworks of python and downright poisonous-looking insect embroideries. The overt African references (springbok belts, Masai beaded fringes, safari jackets) felt tone deaf, whereas a passage of pastel tulle gowns held just the kind of goddess-like, frothy lightness that we’ve come to expect from Guyon’s hand. A boxy jacket too was an artisanal feat, it’s exquisite baroque marquetry inlaid with Mother of Pearl petals and golden thread. A story of tiered dresses in sheer knitted nylon played a pretty game of trompe l’oeil layers with a matrix of tiny beads. Pieces like those will stand alone as red carpet contenders. As for the rest? It may have its day on the editorial circuit, as fancy fodder for the spring season’s many haute couture magazine specials.