The collection felt a little over-familiar — a statement that was strong without being particularly bold, minus the arcana that has always been his special spice. 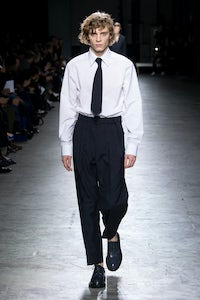 The collection felt a little over-familiar — a statement that was strong without being particularly bold, minus the arcana that has always been his special spice.

PARIS, France — “We don’t need another hero, we don’t need to know the way home.” Oh, what bliss it must have been in 1985 for Tina Turner to sing such words in the utter confidence that life itself would always find a way forward. That was before social media’s tsunami of unedited visual slurry exposed us on a minute-by-minute basis to the manifold abuses, cruelties and idiocies of mankind. (Women and children are exempt for the purposes of this screed.) Sorry, Tina, we do need another hero. We do need to know the way home.

You could say that was what Dries Van Noten’s collection was all about: signposts, guidelines, certainties, disciplines. He composed his soundtrack from nuggets of gold buried deep in the mines of YouTube, a myriad of voices — his heroes Bowie, Basquiat, Hockney, Warhol, Pina Bausch, Iris Apfel — speaking, singing, creating an aural composite of a lost paradise. “I think our society is run by insane people for insane objectives,” said John Lennon. Italian screen icon Marcello Mastroianni muttered in Italian about “nostalgia for the future” (loosely translated). “Maybe one really stops being young when he succeeds only to regret, to love, only the lost paradises.”

Regret is a miserable, damned word. The lost paradise, on the other hand, is something else. Virgil Abloh with his Oz, if you want a cross-reference from this season. Rick Owens with his Larry LeGaspi fandom, if you want another. Van Noten found his in the reassuring precision of men’s tailoring. His first look was a declaration of intent: high-waisted trousers with a wide, pleated leg, white shirt, narrow black tie, a plain black oxford. A strong, timeless image, like the model had stepped out of an August Sander photo in the 1920s. Black and white, pinstripes, a charcoal wool topcoat, and a litany of classics in shades of grey. Clothes for heroes? Maybe so, in their starkness and unambiguous masculinity, for those of a mid-20th century literary bent. But Van Noten’s heroes ran a much wider gamut, and I fell with relief on a flurry of tie dye, signaling the arrival of the heroic psychonauts that the designer has drawn into past collections. Huge, swirling engineered prints detailing journeys of the mind made a fabulous contrast with the dark sobriety that ruled elsewhere.

Such intriguing oppositions have shaped Van Noten’s career. Now that his company belongs to someone else, he is in a position to embark on new adventures But this felt a little over-familiar: a statement that was strong without being particularly bold, and minus the arcana that has always been the special Van Noten spice. No, strike that… the arcana was in the accompanying soundtrack, with layers and subtexts one could only wish there was time to unpick. The search for a hero continues.