The designer-in-residence tried to find an essential compatibility between Hood By Air and Helmut Lang. There was much that was true to the spirit of the original, but the execution showed how tricky reincarnation can be. 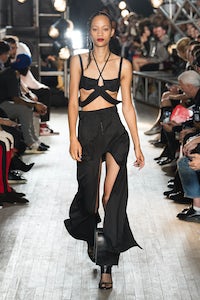 The designer-in-residence tried to find an essential compatibility between Hood By Air and Helmut Lang. There was much that was true to the spirit of the original, but the execution showed how tricky reincarnation can be.

NEW YORK, United States — As fashion’s ongoing game of musical chairs has diminished the idea of the designer-as-creative-director, it has also weakened the concept of the Brand. Helmut Lang’s re-launch on Monday night offered a new blueprint. The brainchild of Brian Phillips, of New York agency Black Frame, it introduces the idea of an editor-in-residence, rather than a creative director, to put together teams on a project-by-project basis, similar to the way an issue of a magazine is conceived. I guess that turns a collection into a curatorial exercise.

Helmut Lang’s first editor-in-residence is 26-year-old Isabella Burley, editor of Dazed and Confused. She is of the design generation which had no direct experience of Lang and his work, but count him as their major influence. “He was so pioneering,” she says. “His relationship with artists, his advertising, his whole graphic language. It was almost more interesting than the clothes…and they were already brilliant.” Viewed through that lens, it’s hard to think of any other fashion legacies that could support Burley’s plans for Lang. Her re-interpretation — and re-contextualisation— is threefold. Every four months, Re-Edition will re-issue a dozen or so iconic pieces from the archives (the first run includes the silver astro jacket, the zip-up denim and the cowboy t-shirt).

Burley has initiated an Artist Project Series, inviting a different visual artist each month to supply three images from their own archive. (First up is Walter Pfeiffer, with three black and white images from the early 1980s. He will be followed by, among others, Boris Mikhalov, Carrie Mae Weems and Peter Hujar.)

The third, and most challenging, idea is a designer residency series. “I’m thinking it will be a different designer every season,” Burley muses. “One might create a collection of five pieces, with someone else, it will make sense to do a full collection and a runway show.” On Monday night, that “someone else” was Shayne Oliver, late of Hood by Air. “I’ve been waiting for this moment,” he said when Burley approached him. “Helmut Lang is Mother.” From her perspective, HBA's shows always gave her the same sensation she imagined people might have got from Lang’s original shows in the Nineties and early Noughts, the same sense of innovation, iconoclasm, tribalism.

It was a shock when HBA ceased to exist, especially when it seemed to be peaking, so there were probably hundreds in the audience who were anticipating HBA redux. Equally, there were surely those who had lived and breathed the Lang era and were dubious about the whole idea of re-interpreting perfection. Especially when you’re only given one shot.

Oliver did the smart, logical thing with his curatorial moment by trying to isolate an essential compatibility. One of the strongest strands in both designers’ work was an understanding of the power of fetish in fashion. The feel of Lang’s fabrics on the skin, the way the body was veiled or revealed, the interplay of hard and soft, metal and silk… there was always a subtle but intense sexuality in his clothes, and that’s what Oliver gravitated towards, starting with the accessories-as–fetish-objects. “And I was looking at undergarments, t-shirts not as a branding thing but as undergarments.” So, the key item in his collection was the bra, dissected to a suggestion of harness, or unzipping from a peculiar leather pouch to make a formidable Brunnhilde breastplate. And there were a number of pieces with a filmy lingerie flow, in the pink that was a Lang signature. The fabrics also ran the Lang gamut, from metallic to sheer.

Certain pieces, like the parka suspended from back-straps or the creamy tailored topcoat, evoked clear images of the past, especially when that coat was worn by Kirsten Owen, the model who was most emblematic of Lang’s glory days. Kudos to the casting, in fact — its blend of Lang favourites like Owen and Danielle Z and the distinctive street cast characters that always populated HBA’s catwalks echoed the particular diversity that made Lang’s stand out in their day.

Oliver also worked with Lang’s notion of restraint, male and female bodies strapped and harnessed, which was Helmut’s aestheticisation of punk bondage. In other words, there was much that was true to the spirit of the original here, so it’s a pity that one season won’t offer Oliver much more of an opportunity to explore it than that. But — and there was always going to be a “but” — it was the execution that showed how the passage of time renders reincarnation so tricky.

There was a pure, cerebral seduction — angel and devil — in the Lang label that was its creator’s, and its creator’s alone. Oliver has always reveled in the physical, and that was the most HBA-ish thing on Monday night. It means two very different kinds of sensuality, old world and new world, and even though you just know that Shayne would love at least one more chance to insinuate himself into Helmut’s world, it also means that world will be eternally out of reach, for anyone who wishes to re-interpret something so elusive.