If loving this is wrong, I don’t wanna be right. 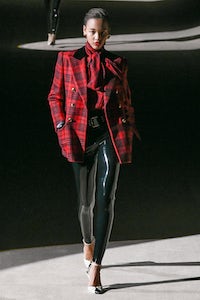 If loving this is wrong, I don’t wanna be right.

PARIS, France — “Saint Laurent is about danger,” Anthony Vaccarello was quoted in his show notes. But the danger was never obvious. Like the wave of plush beige broadloom that swept up the wall of the brand’s usual gigantic pop-up show space on Tuesday night, the front was all well-padded luxury. But the back was a real darkness: sex and drugs and decadence on a grand scale. Every designer who’s taken on the YSL legacy, Vaccarello included, has taken a superficial dabble (only Tom Ford went further).

How could you not? It’s irresistible, especially when you can dip your toe without a month in rehab. But on Tuesday, Vaccarello grabbed the reins, pushed all Yves’s emblematic tokens of bourgeois fetishism to his own limit. It was so brazenly one-note that it too was irresistible. The pussy-bow blouses, the double-breasted jackets, the lace and sheer chiffons, the brown leather, the culottes, the hat my doorman tells me is called a “chapeau melon” (but he won’t bet on it)…even the tiny lace bralettes, the pagoda-shouldered red velvet dress and the forest-green feathered chubby (shades of YSL’s scandalous 40s-inspired collection from 1971) were accessories to the main event – LATEX! If you’ve never loved it, you’ll learn too.

In his heyday, Saint Laurent worked wonders with ciré, a fabric that was waxed to a satiny sheen. (Alex Fury tells me Antony Price’s shiny suits for Bryan Ferry were ciré.) One particular trench coat stuck out in Vaccarello’s memory. He acknowledged that maybe the latex might have been his 21st-century update. But he also claimed he was thinking about YSL in the 1990s, when the designer was less “in the street” than he was in the 60s and 70s. “I wanted to twist that moment with something from now, something younger, less bourgeois, less classic.”

“I do it without thinking,” he said bashfully. “It comes naturally.”

Latex aside, the other distinctive feature in the collection was colour. Saint Laurent was a master colourist, Vaccarello majored in monochrome. He knew it was time for a change. “Everyone says I’m always doing black, I wanted to show I can do colour,” he said. So the latex leggings, pencil skirts, wrap dresses and trench coats ran through a colour spectrum that felt very true to Yves’s own.

Allen’s art ultimately cost him his reputation. With Saint Laurent, it was something else, something lived. The totality of Vaccarello’s presentation honoured that, but also made it appropriate for the absolute twistedness of right now. And he managed it in the most perversely upbeat way. If loving this is wrong, I don’t wanna be right. 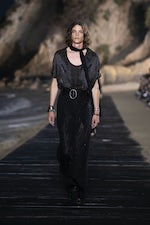 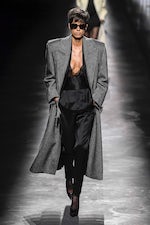 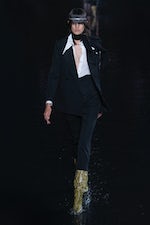 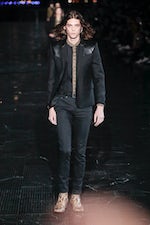