The collection was another way station on the designer's peculiar progress to a kind of peace, where his clothes speak quietly to more and more people. 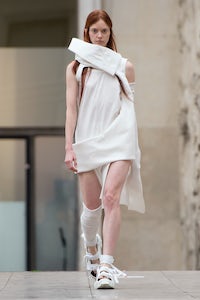 The collection was another way station on the designer's peculiar progress to a kind of peace, where his clothes speak quietly to more and more people.

PARIS, France — For his new show, Rick Owens sat his audience around a fountain, which spurted ferociously heavenwards halfway through the presentation. He thoughtfully provided waterproof ponchos for his audience, because that’s the kind of man he is. Thoughtful. And Owens has been doing a lot of thinking lately, about the world in crisis, about the right way to respond. “Nobody has celebrated doom more than I have, but the responsible thing now is to talk about hope and the way forward,” he mused before the show. “Though I’m not sure how that applies to these clothes.”

We could start with the title Owens gave his show. Dirt. (Same as the men’s in June). “Dirt is modest, dirt is eternal,” he mused on. “It’s humility, like the humility of the human hand.” With that in mind, he started with the idea of wimples and hiking sandals, vows of poverty, how you make do with very little when you’re in a religious order. “And service, which is not a word we use very often in fashion. It’s a nice thought though, again, I don’t know how it applies to this collection.”

The wimples didn’t make the final cut, the sandals did. And service is an idea in progress. But Owens did introduce modesty in the form of his fabric of choice, canvas, even if it was treated in so many ways — rubberised, lacquered, bugle-beaded — that it was barely recognizable. But it contributed to a collection that was another way station on Owens’ peculiar progress to a kind of peace, where his clothes speak quietly to more and more people. There was a palpable innocence in his new designs which made a stark contrast with the Owens of morbidly romantic olden times, when Old Hollywood was the shadowed lens through which he viewed the world.

The show opened with virginal white dresses, abbreviated but protectively swathed in papery wrapping. Towards the end of the show, more white, this time composed of layers of t-shirting, stretched across the torso and all over pillowy, Gumby-like sculptural forms. Owens has been looking at Picasso sculptures, where the roughness reveals the artist’s hand. Picasso was a protean genius, but you got the same sense of protean transformation in the show’s last looks, shapes being pummelled into new shapes, the human form de-formed. Just an idea. Not sure how it applies… Cocoons, maybe? New life?

That is, after all, the crux of it all. Where there’s life, there’s hope. Where there’s hope, there’s a way forward. Owens’ wife Michèle made the soundtrack with her new project Lavascar. It finished with Michèle laughing long and hard. Hard not to join in, Owens said. “What else are we here on earth for but communication?”