Where last season was all about protection and a militant stance, Rocha’s new collection surrendered to fragility. 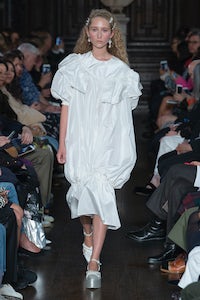 Where last season was all about protection and a militant stance, Rocha’s new collection surrendered to fragility.

LONDON, United Kingdom — “Don’t they know it’s the end of the world?” As the strains of Skeeter Davis’s 1962 hit keened at the finale of Simone Rocha’s show, you wondered, “Did she really just dump dystopia in our laps?” But she’s Simone Rocha. Of course she did! Where last season was all about protection and a militant stance, Rocha’s new collection surrendered to fragility. “The end of innocence”, she murmured backstage. Astonishing really, when you think that her daughter Valentine is just 18 months old. But she has been remarkably honest about the stresses and worries of new motherhood, and she has explored her concerns in her collections in the same way that a writer or artist would in their work.

So Rocha started with dolls, girlish playthings. But they were hers, the Victorian china dolls she threw down stairs when she was a kid till their faces cracked open. They were stored away in the attic, and now she has fished them out – a big box of broken dolls — for her own daughter.

But it wasn’t just those dolls that captured her imagination. Rocha found a book about old folk-art black dolls. The crude stitching, the ticking cloth… they took her too, with the emotion and the ingenuity of their making. That meant there were two distinct strands in her collection: the satin-y ivory perfection of Victorian dolls and the folkish touches of black dolls — and sometimes a synthesis, like the raggedly stitched frieze of red figures dancing round a tiered smock of virginal white cotton.

In the current climate, nothing says “doll” like the psychotic Annabelle, and you could scarcely look at Rocha’s red-spattered cottons and tulles without thinking of her. But purity under threat found another analogy in the designer’s scenario. Not doll’s clothes, but dresses for the nursery: Wendy in Peter Pan, with a dark, dangerous world waiting outside. That is the most enthralling, eerie quality in Rocha’s work. As much as it celebrates innocence, it honours experience. There were some beautiful black pieces here, hand-painted with flowers. Seasoned, slightly wicked. Maybe that represented the end of innocence in this context. But Simone, it was scarcely the end of the world.