Simone Rocha's collection had such a rich, pagan resonance that you could only wonder at the prettiness of the ritual. 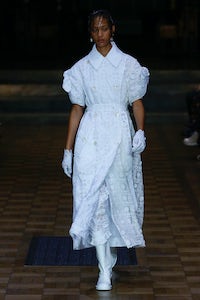 Simone Rocha's collection had such a rich, pagan resonance that you could only wonder at the prettiness of the ritual.

LONDON, United Kingdom — Simone Rocha’s last collection, delivered mere weeks after the birth of her daughter, was dark, troubled. You struggled to imagine how she’d explain it to Valentine in later years. Or maybe she’d just show her the collection she offered on Saturday night, a riposte to darkness, a visible token of a woman who’d found herself again. “Coming home,” she called it. “I felt like myself again.”

In Rocha’s case, that idea has such a rich, pagan resonance that you could only wonder at the prettiness of the ritual: the cloque flowers, the handkerchief hems. But Celt to the core she is, and there was a strong sense of the earth spirit in her show. She cited Jackie Nickerson’s photographic essay Farm as an influence. Some models had leather sacks slung across their shoulders. The oblique show notes referred to “Paul Henry's potato diggers”. In that artist’s wonderful paintings, there is often the solitary figure of a woman bent under the weight of agricultural labour.
Here, it was the art of the fashion designer to transmute that image, to transcend physical toil with airy, aspirational, dream-like confections of tulle and lace. Rocha compounded the sheerness with plastic, with scatters of sequins so everything shone. And she used her signature broderie anglaise in the airiest way imaginable, with the styling of the show slinging coats (just as airy) off one shoulder and belting them at the waist. That dishabille quality was maybe the clearest expression of a woman who was reclaiming her own sensuality after the process of childbirth.
It’s a subtle thing in a Simone Rocha show, but the music is a cue to the reaction she wants to elicit. Irish musician MMOTHS supplied a soundtrack that evolved from pretty pastoral to soaring, savage exultation. That music said it all.  This is me and I'm back.