It’s not the first time Rocha has plumbed such depths of emotion. But her balance of dark and light has never been more acute. 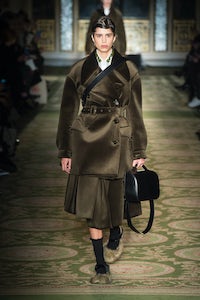 It’s not the first time Rocha has plumbed such depths of emotion. But her balance of dark and light has never been more acute.

LONDON, United Kingdom — There’s doubtless plenty more to come, but, for now, it’s hard to imagine anything topping the Women’s March as the defining image of 2017. Simone Rocha echoed that momentous event when she called her show The Marching Roses.

Femininity is not a soft, girly idea for her. In one way or another, her collections have always celebrated a female fighting spirit. But this one was unusually militant. A response to current events, yes, but the news made Rocha reflect on her own roots. In the notes she wrote for her show, she free-associated the words “feminine” and “famine,” a reminder of a black moment in Ireland’s past, when hundreds of thousands of people died or were displaced during the Great Famine of the mid-19th century, when it fell to women to hold families together, to guarantee survival.

So Rocha’s collection was built around ideas of protection and camouflage, but in her own particular way. Her opening looks had the structure of soldier’s uniforms. It was armour-like, though it was actually velvet bonded to neoprene, Other military details included bellows pockets, bags, harnesses and clogs. Her camouflage was flowers and foliage — roses, daisies, gorse — embroidered or appliqued everywhere. They were sweet, but the Celtic darkness at the heart of Rocha’s vision also made me think of bright blossoms of blood. Marching Roses have thorns.

While Rocha celebrated strength, she also acknowledged vulnerability. Chiffon embroidered with little red flowers veiled silk dresses. The models clutched stoles of faux fur, like security blankets. Even with no awareness of the collection’s back story, you could sense the trauma at its heart. It’s not the first time Rocha has plumbed such depths of emotion. She insisted she couldn’t imagine doing what she does any other way. But her balance of dark and light has never been more acute.

“The last year was very intense for me personally,” she said, “but I came through it, opened the store, so this was a sigh of relief.” She called on a remarkable, inclusive cast of characters to help her: three generations of women, from Benedetta Barzini and Jan De Villeneuve to Marie-Sophie Wilson and Audrey Marnay to Mica Arganaraz and Adwoa Aboah, kind of like the spiritual mothers and daughters of modelling. And that meant the show was also a salute to Simone’s remarkable mother Odette, who has been at her side throughout her rise.