Inspired by Ireland’s wren boys, the exquisite pieces that made up the designer’s latest collection seem destined to become nothing less than heirlooms, worthy of new traditions to come. 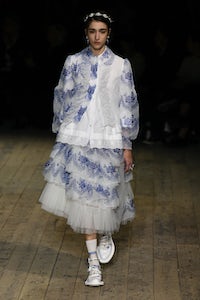 Inspired by Ireland’s wren boys, the exquisite pieces that made up the designer’s latest collection seem destined to become nothing less than heirlooms, worthy of new traditions to come.

LONDON, United Kingdom —  “I really wanted to show in the round,” whispered Simone Rocha backstage before her show in the circular, wood-floored theatre of the Alexandra Palace, built in 1873 on a hill in northernmost London with a vista of the city sprawling towards the Thames. “My mum was from county Offaly, where the wren boys would knock on the doors of these old houses in all their faded glory; they sang and danced in circles,” she explained, referring to the packs of youths in her native Ireland, who, festooned with raffia crowns and masks, would hunt for wrens on St. Stephen’s Day (December 26) and then knock on the doors of the country’s grand old houses to sing and ask for money. “When I was looking at Alexandra Palace theatre, I loved its disarray — sort of halted in time — it felt like those boys were coming to knock down the doors here. And, they call it ‘the people’s palace.’”

Musings on those rakish boys and stately Irish homes proved fruitful for Rocha, as she unearthed yet more bygone narratives to stoke her creative fire and provide new ballast for the dense bank of fabrications that she applies to each of her collections. “Along with the old Delft porcelain, there is lots of blue china at Birr castle in Offaly, seeing as the Earl of Rosse married a Chinese lady. I thought this was so amazing!” recounted the Dublin-born designer, who has both Irish and Hong Kong heritage.

Cue look one, where those ceramic motifs shrouded white cotton and tulle as a printed blue gazar that sliced down one side of the garment but not the other, like shards of a broken plate. Framing her accessories, steel spikes protruded amongst the familiar pearls and crystals — evidence of a toughness Rocha has seldom explored. After last season’s Louise Bourgeois-inspired prints and all-over sequins, Rocha’s major craft push this time around came in the form of hay and raffia plaited through hair braids or knotted into garlands, brooches and bags. Reaching almost Wilder Mann proportions as a raffia latticework sheath festooned with pearls, it stirred images of the pagan Irish lore that Rocha so loves.

While the show rolled on to swelling drums and haunting strings, petticoated layers and bulbous sack shapes were undercut by sharper tailoring: a sober subplot that countered the romanticism of the moment. “There’s lots of trousers, crombies, peacoats — some are done in very masculine ways and then mixed with the upholsteries from the houses and interpreted into woven brocades and cloques,” she explained. “The girls feel like they are stomping through the space.”

Girls she said, yet this was a show of (and for) women: from ginger beauty Karen Elson to a cast of Irish actors and singers, from snow-haired Olwen Fouéré to Valene Kane, Jessie Buckley and Tia Bannon, taking Rocha’s highly personal and inclusive take on casting further from the fashion world than ever before. That some of the models bore delicate wren’s feathers painted over their ‘third eye’ was just another example of the show’s potent mythology. But storytelling aside there’s no doubt the wild beauty of this collection will translate far beyond the counties, for these will be heirlooms: precious clothes passed down the generations and wrought with new traditions to come.