The designer showed a potent new discipline in this collection, after last season left her feeling uncomfortably exposed. 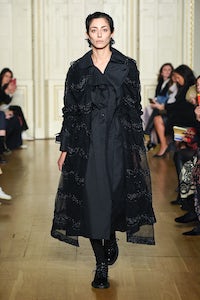 The designer showed a potent new discipline in this collection, after last season left her feeling uncomfortably exposed.

LONDON, United Kingdom — The prettiness of a Simone Rocha show is rarely just that. Layer upon arcane layer build to tell a story that is seldom what it seems. Her latest presentation was a perfect illustration. Intimacy, privacy, security, femininity: these were the ideas Rocha said she started with. But, on elaboration, it turned out that it was invasion of privacy she meant. Last season, the Chinese and Irish sides of Rocha’s family inspired her collection, and that inevitably opened a window on her private life that left her feeling uncomfortably exposed. That got her thinking about how other women are exposed. Quantum leap to Michael Powell’s serial killer shocker “Peeping Tom,” still profoundly disturbing 60 years after its original release. Was there something of that movie’s fetishistic obsession in the way Rocha’s new designs unexpectedly exposed undergarments (extremely disquieting), revealed the body, or wrapped it in a flasher’s mac?

Less ambiguous was Rocha’s fascination with the intimacy of artist Louise Bourgeois’s work, in particular the way Bourgeois turned her own clothes into art. It’s easy to see the kinship there. Working with the artist’s studio, Rocha was able to use her circular web-like motifs as prints or embroideries. They were beautiful. Less so were Bourgeois’s bulbously phallic shapes translated into tailoring and dresses. They tended toward the historicism, which can introduce a costume-y element into Rocha’s clothing.

But in general, there was a potent new discipline here. Waists were defined, at least, but it was in a womanly way, more “grown-up” than before, a fact Rocha acknowledged with her fabulous casting: Chloe Sevigny meets Kirsten Owen meets Marie Sophie Wilson meets Jeny Howorth, who, in this season’s competition to bring back A Catwalk Legend, trumped Patti Hansen at Michael Kors’s show in New York.