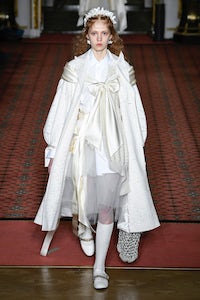 LONDON, United Kingdom — Simone Rocha keeps her own saint a secret but her new collection honoured Malachy, the patron saint of prophecies. That was just the sort of mythic connection we’ve come to expect from her. Rocha’s roots run deep in Ireland, in its ambiguous combination of Catholicism and paganism. Her latest inspiration was “Riders to the Sea,” a 1904 one-acter by J.M.Synge set in a remote fishing community in the Aran Islands, where the church and the old ways mesh uneasily. Birth, life, loss, Synge’s themes, were Rocha’s too. She conceived her show like a procession, in three sections, to reflect that.

But, of course, it wasn’t that precise, because her clothes aren’t. They’re soft, fluid layers, floating clouds of fabric, restrained by ribbons and sashes. They are clothes for rituals and ceremonies, and they make primal connections, a first communion and a wedding, a birth and a funeral. Rocha’s clothes are often beautiful, in the way that Elizabeth Fraser’s voice or a Visconti film is beautiful – they exist out of time – but they get their weight, their haunting gravitas from the melancholy which steeps her work. This new collection, with its circle of life, was no exception.

The sea ran through the show: netting made of macramé, pearls studding shoes, fishermen’s sweaters dissected into hawsers of cabled braiding. There was something ominous about the way they draped round shoulders, weighing down virginal white dresses. Rocha preferred the word “visceral”, visceral like the red sashes that streamed over rose prints, or the pulsing Sacred Heart. And visceral like the post-punk sound of Dublin band Fontaines D.C. blasting on the soundtrack.

Did the show close with a bride or a mourner? That ambiguity is a typical takeaway from a Rocha show. What did Malachy see? “Rebirth,” Simone said hopefully. But she didn’t sound very sure.