The muted colours and softness of the clothes was far from the designers' tough, maximalist breakthrough aesthetic, but in tune with the times. 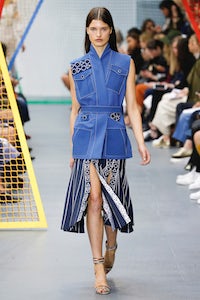 The muted colours and softness of the clothes was far from the designers' tough, maximalist breakthrough aesthetic, but in tune with the times.

LONDON, United Kingdom — Actors often fear being typecast by others, but on London's fashion scene, it seems that designers often fall into the trap of typecasting themselves, attracting a following and then struggling to evolve from there. The duo behind Peter Pilotto are just two of those designers, but it is a problem that appears to affect London designers more than others. And so, during the past few seasons we’ve seen Peter Pilotto change the tone and pitch of their clothes — moving away from the digital prints that first attracted attention, sometimes trying a bit of psych rock, other times exploring embroidery.

This time around, the inspiration wasn’t exactly ground breaking for a Spring/Summer collection. After the show, designers described it as “very summery elements of clothing." This meant safari jackets, desert clothes and so on — in short, clothes for very hot weather. The smock shirt was also important to the collection; you could even say it was its lead motif, as the technique showed up on tops and as detailing through the presentation.

The brand’s prints were reduced to appearances on three tiered satin and georgette dresses at the end of the show. You wondered if that is going to be enough to please the fans and the buyers, especially since the muted, pastel colours and relaxed softness of the clothes was, frankly, pretty far from their tough, maximalist breakthrough aesthetic.

But this is not just about Peter Pilotto. It is clear that there has been a shift in fashion, away from the sleek and super polished towards something warmer, more emotional and lived in. It is what we see in the vintage feel of the new Gucci: something more human and fallible, something homespun. It is also evident in the interest in “unconventional” models.

Here you could see it in the knit dresses — the ultimate material for conveying a human touch (even when made by a machine) and in the patchwork vibe. The truth is, it was beautiful. As a steel pan played on the soundtrack the slightly off sounds reinforced the message: We are living in imperfect times. 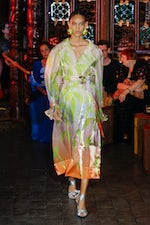 A Clash of Cultures at Peter Pilotto 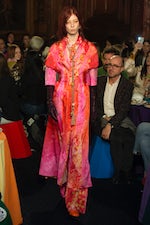 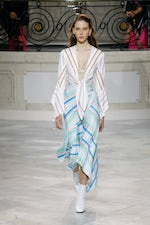 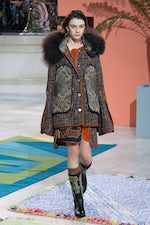