For its 50th anniversary, the brand embraced the lyricism of city life on a street named after the founding designer, showing signatures of the house successfully updated by Julie de Libran. 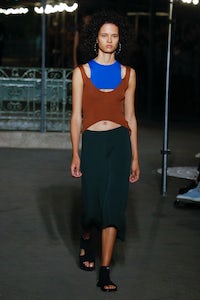 For its 50th anniversary, the brand embraced the lyricism of city life on a street named after the founding designer, showing signatures of the house successfully updated by Julie de Libran.

PARIS, France — Back in New York — remember way back when? — Ralph Lauren celebrated his half-centennial with a fashion show in Central Park and a splashy black-tie hoopla with pals Oprah Winfrey and Hillary Clinton. A few weeks later and a half-a-world away, the brand Sonia Rykiel also used its runway show to celebrate its 50th year. It was a lower-key affair, and lovely in its insouciance — trés Parisien, you might say.

Still, the mayor of Paris, Anne Hidalgo, christened a charming, leafy lane in the 6th arrondissement near Rue de Babylone “Alleé Sonia Rykiel” after the label’s namesake designer, who died in 2016. The night was mild and cool, and passersby crowded the street-cum-catwalk, taking pictures with their phones and grinning. In the morning, an organic market would replace the runway.

Anniversaries are hard. Do you go for a greatest hits retrospective or business as usual? And equally pressing: How do you encapsulate a person’s life, their oeuvre, in a single show? And in this instance, a woman who dedicated her life to capturing the irreverent side of Paris’ Left Bank’s artsy-cool culture and France’s almost innate understanding of personal style?

Sonia Rykiel artistic director Julie de Libran did a wonderful job, taking signatures of the house — the oversized “poorboy” sweater, the trench, the mariniere, capes and so on — and updating them in a frisky, lighthearted manner. In her way, she merged the ideas of a retrospective and a “normal” collection.

“I believe in the woman of Saint-Germain,” she said in her show notes. “I wanted to pay homage to the lyricism of everyday life in this Parisian neighbourhood, to the streets so related to Sonia Rykiel herself.”

The diverse cast of models toggled between vintage market bohemia of macrame layered knit dresses over swooshing fringe and open lattice-weave sweaters that were cozy, playful and sensual. Oversize tailoring in forest green or muddy brown had slashes at the elbows and were worn with a sort of gamine toughness that was appealing. A sailor sweater turned into a long knit dress, twisted and held in place at the waist with a sparkling broach. A sweet cotton jacket worn with silky lingerie slip felt improvised and fresh.

With the models’ sandals and netted market bags, or with men walking alongside children with dogs and skateboards wearing “Alleé Rykiel” printed hoodies and tracksuits, you got the feeling that De Libran meant to evoke the unnoticed glamour of everyday Parisian life, the unexpected cool of tossing on whatever you first saw before running out the door, or making do when morning errands turn into brunch, and troll with friends and evening drinks at a cafe.

The ideas of simple city pleasures was all there, in the effortlessness and unexpected beauty of the quotidian — that real style is baked into your daily goings-on. That Rykiel herself wasn’t there to see it added a wistful quality to the show.

However, it’s doubtful that was De Lebran’s intent. It was a happy show about the Epicurean joys of life. The models walked down the runway grinning for the final loop, flowers and baguettes peeking out of their bags, and in the morning, some woman, looking unexpectedly chic, will no doubt be shopping for fruit at the market.