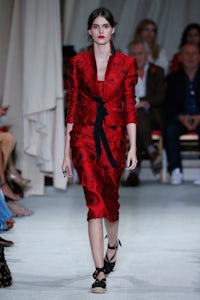 NEW YORK, United States — In his quarter century in fashion, Peter Copping has proved himself an expert interpreter of the codes of other designers, but the legacy of Oscar de la Renta has presented him with a particular challenge and – with his latest collection – the particular gratification of mastering that challenge. Famously attuned to the whims of his devotees, Oscar himself managed to manifest a modernity that defied his 80-some years. That wasn’t the path Copping took to Spring 2016. Instead, he asked himself what Oscar was most passionate about, then he went there. Nothing archival, more de la Renta’s early years in Madrid apprenticing with Cristóbal Balenciaga, and back-up from the Hispanic Society in Harlem, with its huge archive of textiles and relatively unsung collection of paintings by the likes of Goya and Velasquez.

It was all there in the intensity of the first look, a suit in a dramatic, deep red poppy jacquard, closed with a black ribbon, shoe-ed with espadrilles. Even more, the second, featuring a capelet in that same jacquard which split open to reveal a black Chantilly lace tank. The confident dressiness was instantly striking. “I’d never done that before,” Copping said post-show. “It’s never been in my realm.” But he has quickly learned in his time at Oscar that women in the US dress up more than their counterparts anywhere else in the world. More events to attend, more changes of outfit needed. And boy oh boy, did he serve them up.

The Spanish drama unfolded in variations on a theme of black and red, shades of the corrida, with poppies supplanted by carnations — the flower of the bullring. Then, Copping alleviated the fierceness with dresses in carnation-printed crepe de chine, with a cotton poplin dress the colour of egg yolks, or a ruffled, ruched outfit in deep green broderie anglaise.  One sweater looked like it was stitched together from delicate lace handkerchiefs. The subtle extravagance of something like a guipure lace coat embroidered with mink flowers pointed towards a finale of proper evening dresses, a sweep of aqua or lilac taffeta, tiers of sea-foam organza overlaid with black lace. There was gorgeousness in such grandeur, but it all felt like a window on a world that even Oscar himself had moved on from before his death. Still, he was a master of instinct — maybe it’s now Copping who knows something we don’t. 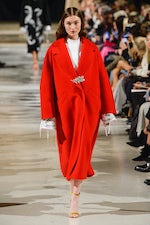 Into the Woods at Oscar De La Renta 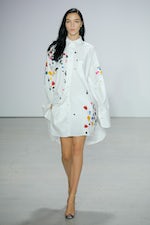 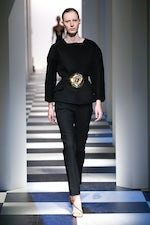 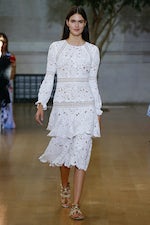