Stories Embedded in the Fabric at McQueen

There have been seasons when Sarah Burton’s allegiance to her past crippled her own relevance. Time has a way of readjusting such perceptions. 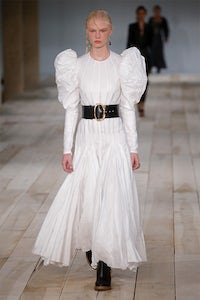 Stories Embedded in the Fabric at McQueen

There have been seasons when Sarah Burton’s allegiance to her past crippled her own relevance. Time has a way of readjusting such perceptions.

PARIS, France — Moon-bleached linen. It was an actual thing. Irish artisans would lie linen in the moonlight for a year until they achieved the shade they sought in the fabric. It yielded a fabric that was so precious it was, at one time, the most expensive in the world. Maybe witches danced and leprechauns pranced while they waited for the magic to happen. Would you be surprised? The idea is that outlandishly, stupendously beautiful. And I have Sarah Burton to thank for letting me know that not only was moon-bleached linen a thing, but it was also a thing in the new McQueen collection.

Earlier in the day, George Clinton, the Captain of the P-Funk Mothership, appeared in the front row at the Sacai show, so I was already primed for the extraordinary. But I had no idea whence it would come. Against a wall in the garden where the McQueen show was happening were stacked mood boards pinned with swatches of fabric. They had the hand and sheen of black leather, but they were “beetled” linen. "Beetled? What means this?" I asked Burton. Beetling is a traditional Irish process in which linen is submerged in potato starch and then beaten for a month with wooden hammers. There is only one company that still does it: William Clark, 300 years old. They usually beetle linen — black, white or natural — for the interiors of jackets. That obsessive craft, that long history… hidden. But no more.

Following on from her last show, which was formed in the mills in the North of England where the cloth that made England’s name in fashion was produced, Burton was looking for another source where the story was embedded in the fabric. Hence, Ireland, and William Davis, and beetling. Dresses were made in all their complexity, with pleats and pintucks and buttons, then taken apart and sent to Ireland for beetling. Then the pieces were to be returned for reconstruction. As with the moon-bleaching, Burton was entranced by the slowness of the process. She was in a mood to take time and care to reduce and refine. Her ideal was the simplicity of the raw cotton canvas toiles that she usually works from.

While this was going through Burton’s head, artist Julie Verhoeven was conducting life drawing classes in the studio on the third floor of McQueen’s Bond Street flagship. Her students were using items from old McQueen collections, and they were collaborating with each other to make their work. Burton took what they’d produced, engineered it onto a dress and brought it to the McQueen studio. Working with Stitch-School, a London group devoted to reviving embroidery as a communal activity, she had everyone embroider a section of the dress and initial their contribution. Stella Tennant wore the finished item in the show. What better way to illustrate the idea that every single garment has a different story to tell? History, community, connection, restoring humanity…it’s what designers crave, and their customers now expect.

There have been seasons when Burton’s allegiance to her past with Lee McQueen crippled her own relevance for a contemporary audience. It’s reassuring that time has a way of readjusting such perceptions. She opened her show on Monday with a dress in beetled white linen that reworked Lee’s calico original, from the Eshu collection in 2000. It looked like a gorgeous end-of-season consummation of so much we’ve been seeing on catwalks elsewhere, never mind that the show itself unfolded in the graphic dialogue between black and white that has graced the most memorable presentations for Spring/ Summer 2020. And this was one of the best. I defy you to deny me Imaan Hammam in an ivory coat dress, or Adut Akech, unimpeachable in a flaring, multi-layered, beetled black linen jacket.

Burton made the simplicity of her raw canvas toiles overwhelming with that powerfully reductive dialogue. But she didn’t stop there. There were glorious confections of organza, like the spiky flowers of the flax plant that a visionary couple whom Burton met is trying to reintroduce to Ireland (they’ll eventually make fabric from the fibre). And there were outfits with beautifully embroidered florals, inspired by endangered flowers.

The sense of nature’s mysterious, incalculable bounty was never far away in this collection. But there was also the flair for wild romance that makes the McQueen brand so unique. Adut was wearing a garnet pendant modelled on something similar worn by an Irish pirate queen who refused to pay taxes to Elizabeth I. The beauty of defiance could be fashion’s timeliest message right now.