Clare Waight Keller celebrated the innocence and optimism of youth culture, but the vision was so idealised it felt a bit out of touch. 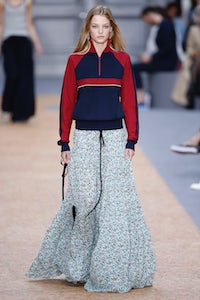 Clare Waight Keller celebrated the innocence and optimism of youth culture, but the vision was so idealised it felt a bit out of touch.

PARIS, France — Clare Waight Keller didn't see Chloé's Summer of Love show as a festival scene. A Glastonbury girl herself, she seemed taken aback that anyone would consider her new collection "festival clothes." But, when you open your show with Primal Scream's rave classic Loaded - “we're gonna have a party" —  you also open yourself up to a certain set of expectations. Especially when you've already invoked the name of Queen Kate in your show preamble... and especially when your first look is a full floral skirt with a tracksuit top: West London on its way to a date with a sound system in a field far, far away.

The casualness of that attitude sounded chords throughout the show, from Edie Campbell in an actual tracksuit (with heels), to the hip-slung sass of a floor-sweeping skirt, to dungarees over a black lace bandeau. There was so much more that brought to mind sun-soaked indolence: denim in drawstring pants or a shirred halter dress, , a crocheted shift, an off-the-shoulder top, ruched, lace-trimmed and simply lovely.  Not to mention the entire colour palette.  If it wasn't, as Waight Keller insisted, suitable for festivals, it was, at the very least carnival-ready (as in Notting Hill).

She claimed her show as a paean to the innocence and optimism of youth culture (disparaged as "yoof" in her homeland). And yet, this being the house of Chloé, the dungarees were double georgette, the tracksuit was knitted silk. So innocence has a price tag. Never mind that it's also, at best, a moveable feast in the young — whose appetites tend to defeat the very best intentions. And maybe that's why this collection didn't quite stick. Its vision was so idealised it felt a bit out of touch. 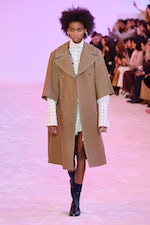 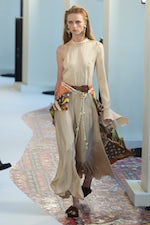 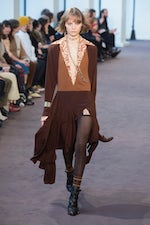 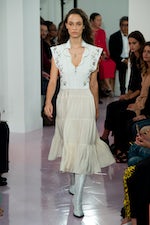