The Ambush Dream of Escape

Dreamspinning was Yoon's major asset during the years that Ambush was a cognoscenti jewellery business. Now with the addition of clothes, the dream is getting bigger. 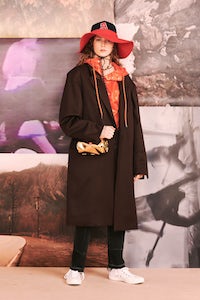 The Ambush Dream of Escape

Dreamspinning was Yoon's major asset during the years that Ambush was a cognoscenti jewellery business. Now with the addition of clothes, the dream is getting bigger.

PARIS, France — The first thing you noticed on entering the Ambush showroom was a “snowbank” studded with red poppies. “Yes, poppies in the snow,” Yoon Ahn said with a laugh. “Rebirth, coming back to life.” She also reminded me of a famous photo of Kurt Cobain lying in a poppy field. Like Cobain, she’s from Seattle, but she’s been living in Japan for the past seven years, and until last summer, she hadn’t returned.

After Tokyo’s greyness, the deep greens of the Pacific Northwest brought the past rushing back. So Yoon’s second full collection of clothes for her label Ambush (the first being the one she made for the LVMH competition last year) was a reflection on memory, on comfort — and on home. “I feel it’s all the stuff my friends and I used to wear,” she said. “We had no money so we’d shop vintage or at the Salvation Army. And Seattle is wet and cold, so we’d wear a lot of fleece and outdoor gear.”

So, basically grunge, then? “I didn’t want to do it literally,” Yoon countered. “It was never really like it was being portrayed on MTV anyway. I think of something more romantic, without rules.” To the untrained eye, the Ambush collection initially displayed all the grunge markers — a vintage-look poppy print mixed with flannels, a man’s jacket thrown over top, polo shirt layered over plaid, the pajamas, the second-hand feel — but closer inspection clarified what Yoon meant. There was a dreamy, androgynous languor in the look of an elongated fish-tail anorak over the shirt-dress which stretched to the floor. The models trailed strings of beautiful glass beads. The showroom was misted with something, Robert Plant moaned The Rain Song. It was the Ambush dream of escape.

Dreamspinning was Yoon's major asset during the years that Ambush was a cognoscenti jewellery business in Tokyo. For a designer with no formal training of any kind, she was blessed with a very convincing eye for detail. Each season there’d be a new story — Jack Kerouac, James Dean, the Clash — artfully elaborated in accessories. Now she has a complete collection of clothes to play with, the dream just got bigger. She’s managed to make it more personal too. Paradox persuades.