Less than perfect is just fine with Stuart Vevers as he sets a new course for Coach. 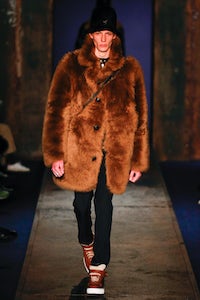 Less than perfect is just fine with Stuart Vevers as he sets a new course for Coach.

LONDON, United Kingdom — “An American brand should really have a different approach to luxury,” Stuart Vevers was saying after his show for Coach on Saturday night. “Otherwise, what’s the point?”

Then he heard himself, and quickly zipped his lip. But really, what is the point? It’s not like it isn’t a question that’s being asked in a hundred ateliers across the globe. But Vevers had an intriguing response with his latest men’s collection: high fashion with lo-fi balls. Or, to give it a more elegant spin: finding the heroic in everyday American life. Think Bruce Springsteen coming out of Asbury Park with his first album — or the early days of hip-hop. Spontaneity, simplicity, uncomplicated masculinity, no room for formality.

But Vevers is from Yorkshire, not Noo Joisey or the Bronx, so his point of view is always going to be that of the fascinated outsider. Which is why his Coach collection played out a little like a Junya Watanabe take on Americana. Every detail of the shearlings and leathers and utility-wear — elbow patches, reflector strips, panels of blanket check — was seductively perfect. Everything, whip-stitched shoes included, looked already worn, imbued with personality. Which is exactly what Vevers wanted. “Character is imperfection,” he said.

He added his own quirks, like the kid-stuff knitwear motifs (dinosaurs, rockets). And couple a big, fuzzy shearling coats, shown with a flowerpot-man floppy hat you got Huggy Bear, not Grandmaster Flash. But Vevers is clearly confident in his re-conceptualisation of Coach. Just as he did with his women’s show in September, he kept his message tightly focussed: 46 outfits that never wandered far from his everyday-hero theme. And that was ultimately very convincing. 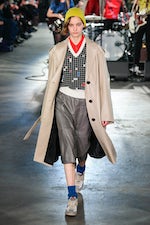 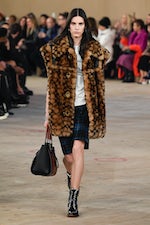 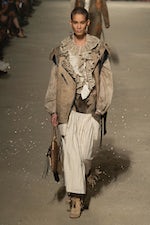 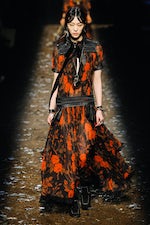