The Limits of Sculpture at Hermès

Nadège Vanhee-Cybulski made her presence more strongly felt at Hermès, but the results were not entirely convincing. 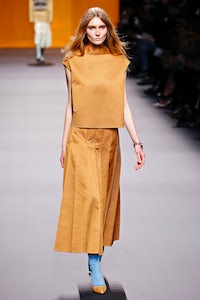 The Limits of Sculpture at Hermès

Nadège Vanhee-Cybulski made her presence more strongly felt at Hermès, but the results were not entirely convincing.

PARIS, France — How do you update a collection rooted in timeless luxury? It's a delicate thing. Keep things too calm and subdued and boredom is around the corner; push things too far and there's the danger of overdoing it.

So far, Nadège Vanhee-Cybulski has opted for a soft tone of voice at Hermès. Understatement clearly suits her. Her collections have been all about pared down simplicity to the point of looking utterly, if deceptively, normal.

Vanhee-Cybulski's latest collection — which she showed in a vast room laid out with glossy, enormous geometric shapes as seats — was her third since becoming the creative director of the venerable French maison. This time around, she made her voice as designer more strongly felt. But the result was not entirely convincing, even though the craftsmanship and hyper-luxe materials were outstanding as usual.

The quest for precise, sculptural shapes came with too much bulk and too much weight. Tops and trousers looked heavy, and moved around the body in awkward ways. This was certainly intentional — Vanhee-Cybulski was after an idea of clothing as mobile sculpture, as notes sent to the press declared, and a strong positive attitude. But with their stompy, stack-heeled boots, the models looked like a military troop, an impression reinforced by the strict and stiff precision of the cuts. Studded pieces added a further dash of aggressiveness to the proceedings. The colour palette was not of great help either, moving rather haphazardly from rust to grey to midnight blue to acqua to salmon.

It is entirely understandable that Vanhee-Cybulski wants to set a stronger design template as she becomes more comfortable with Hermès' codes. But she needs to edit more vigorously and find a more intimate dialogue between clothing and body. She surely has the skills to do so. 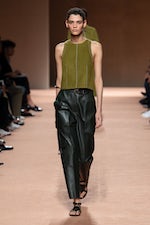 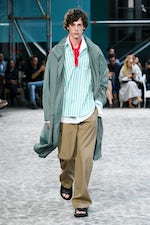 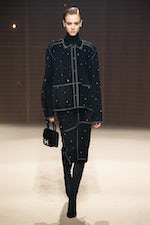 Seduction and Restraint at Hermès 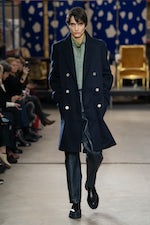