There was a pussy-eared beanie on every seat as Angela Missoni incited the fashion industry to stand unified and strong. Missoni was always going to be one of those propositions whose time would come again. 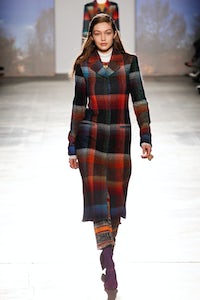 There was a pussy-eared beanie on every seat as Angela Missoni incited the fashion industry to stand unified and strong. Missoni was always going to be one of those propositions whose time would come again.

MILAN, Italy — The first track on the soundtrack of Missoni’s show on Saturday afternoon was Gil Scott-Heron’s The Revolution Will Not Be Televised. Frederic Sanchez had clearly taken on board that Angela Missoni wanted her new presentation to be infused with an activist sensibility.

She was disappointed that the spirit of the women’s marches which had galvanized the globe in January had bypassed Milan, and her reaction was to turn her show into a celebration of women’s rights. Pink pussy power! #pinkisthenewblack.

There was a pussy-eared beanie on every seat, and the audience was invited to join Angela, her family and the models on the pussywalk at show’s end for a moment of raucous jubilation, while Patti Smith’s People Got the Power blasted out.

We’re going to need such reminders in the years to come. Angela Missoni is uniquely placed in the fashion industry to offer them: not just the trans-generational aspect of her business (her mother and her daughters at her side) but also the nature of what it makes. If a product could embody the humanist impulse, it is surely an artisanal Missoni knit.

2017 is Angela’s 20th year at the helm, and she claimed that, in all that time, she’d never looked at the massive archives, 65 years worth. This season, she finally did. Wise move: the opening passage of the show — Gigi Hadid in a gorgeous rich plaid coat (the first of many), followed by a fractured chevron and Technicolor deco patterns — felt energised.

Missoni was always going to be one of those propositions whose time would come again. You could feel that shift kicking off with the men’s show in January. Maybe it was the idea of sweater dressing that has become so appealing. Consoling, perhaps — clothes you could cocoon in. A lot of the knits here were chunkier than usual for Missoni, more of the hand about them. But there were also form-fitting knits shot with lurex, clothes for going out, celebrating. Casual, easy clothes that could also say something definitive about who you are.

It’s something Missoni has always done. That consistency constitutes authenticity. And Angela’s passionate proclamation at the end of the show — inciting the fashion industry to stand unified and strong — was also a natural extension of her own commitment to encouraging and promoting women in her company. Where we’re going no one knows, but there will be lights along the way.