Co-creative directors Laura Kim and Fernando Garcia plastered Mr de la Renta's handwriting all over their latest collection, while working hard to inscribe it with their own ideas as well. 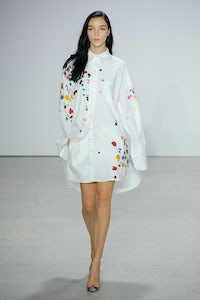 Co-creative directors Laura Kim and Fernando Garcia plastered Mr de la Renta's handwriting all over their latest collection, while working hard to inscribe it with their own ideas as well.

NEW YORK, United States — Remember the Oscar de la Renta dress that Sarah Jessica Parker wore to the 2014 Met Gala? It was a proper ball gown, rendered in black-and-white duchess satin with a train covered in a windowpane check, the designer’s signature scribbled in red across the bottom. Looking back, Laura Kim and Fernando Garcia’s invisible signature was there, too. They were his right hands, after all, and their desire to tease out the house’s tropes — including the namesake designer’s very personal brand stamp — was evident even then.

Now, as co-creative directors of the house, they’ve taken logo play to the extreme, swirling that standard cursive version into black ribbon or scattering a jumble of giant sequinned letters spelling O-S-C-A-R over the front of a tea-length tulle cocktail dress. Mr de la Renta's handwriting was all over the collection, sewn onto a white t-shirt, etched into a white fur coat, embroidered onto tiers of tulle. Kim and Garcia lifted scrawl from other sources, too, stitching the lines of a thank you note from the actress Emma Watson onto a white-cotton boiler suit.

It’s no surprise that the designers appear eager to keep Mr de la Renta, who passed away in the autumn of 2014, top of mind. They still want to impress him. And they had quite a great deal to prove this season after a wholly uneven debut last February. Kim said things were easier this time around because they had the space to get to know their team, many of whom had been installed during the duo’s brief, eventful, stint away from the label. But they also had time to work out what they want their version of the brand to be.

Their Oscar is youthful in silhouette and aggressive in colour. Kim and Garcia know that the ladies who lunch now wear jeans, so they made some, decorating them with paint splatter-like clusters of sequins. The art-project vibe was fully realised in heavily collaged pieces, neon strips of laser-cut napa leather overlaid onto sheer black tulle shift or engineered into a jacquard knit t-shirt dress. These were ostentatious overtures, and Kim and Garcia often teeter along the line between good and bad taste. (Their front-row friends Paris and Nicky Hilton can relate.) For instance, instead of feeling playful, their paintbrush stiletto heel instead read Vegas.

Then again, if you’re a Jeff Koons-loving blackjack player, perhaps this is the collection for you. But even if it does attract a slew of new business, what happens to the customer who likes her Oscar just as it was two years — or two decades — ago? “That’s all in the showroom!” Kim said re-assuringly. “That’s our bread and butter,” Garcia added. To be sure, after years of studying under Mr de la Renta, they know what their core customers want. Whether they’ll be able to attract a new audience remains to be seen, but that gushy note from Watson, whom they outfitted on her "Beauty and the Beast" press tour this past spring, was a promising indicator of future success.