The Particular Flavour of Altuzarra

The “emotion bursting through the cracks," in Joseph Altuzarra's collection left a lingering, haunting aftertaste. 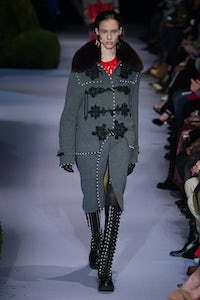 The Particular Flavour of Altuzarra

The “emotion bursting through the cracks," in Joseph Altuzarra's collection left a lingering, haunting aftertaste.

NEW YORK, United States — If there was a sense of dislocation in Joseph Altuzarra’s show — cued by a quote about deceptive appearances from Lady Macbeth in the press material and a set that surreally posed huge mossy boulders on pink broadloom — that was only because, as the designer acknowledged, we live in dislocating times.

His new collection was regally opulent in its fabrics and decoration, but there was a pleasing sense of not-quite-right-ness bubbling below the surface: laddered stockings, jackets tightly buttoned, laced or corseted, keeping something contained… but for how long?

Altuzarra has toyed with the idea of pent-up emotion in the past. “It’s a process I was happy to come back to,” he said. It wasn’t only the unhinged Lady Macbeth he had in mind. He’s also been watching The Crown. It was easy to picture the pent-up young princesses, restrained by tradition, in pearl headbands and Altuzarra’s precise little velvet-collared jackets.

The designer’s research had taken him into the world of Renaissance portraiture, paintings of the rich and powerful (another timely theme). The colour scheme drew on deep velvety tones, shades of Shakespeare. A mink jacket studded with pearls looked like Altuzarra’s take on the royal ermine.

If he dodged the costume bullet, there was still a distinctly period feel about the clothes. When the models came round those boulders in their shapely suits, fur-collared coats and sturdy boots, they might have been walking back to their country houses from lunch in the local village — in the Highlands, or maybe on the moors — in a British film from the 1940s.

Then they would dress for dinner in one of the evening gowns, trimmed in pearls, traced with precious filigree, with which Altuzarra closed the show. The bodice of one was slashed. “I love things that are a little bit undone, imperfect,” he said. “Emotion bursting through the cracks.” That left the lingering, haunting aftertaste which is the very particular flavour of an Altuzarra collection.