The Power of Normality at J.W. Anderson

On the brand's tenth anniversary, the designer showed surprisingly normal clothes, not the painstakingly curated stuff that's good for editorials. 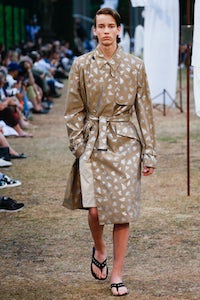 The Power of Normality at J.W. Anderson

On the brand's tenth anniversary, the designer showed surprisingly normal clothes, not the painstakingly curated stuff that's good for editorials.

FLORENCE, Italy — Today, is it clothes that count or the fashion show as an experience?

In his first show outside of London as a special guest of Pitti Uomo, Jonathan Anderson wanted his audience to be drenched in Florentine sensations, like tourists lost on the lungarno or sweating on the Ponte Vecchio. He choose the magnificent Villa La Pietra up in the hills as a venue. It was a journey, up a narrow street and along the green aisles of a marvellous garden, to get to the show location: a grass lawn with white cushions as seats and An Low's metal and linen sculptures peppering the space like abstract camping furniture.

Anderson likes haphazard pêle-mêle, and this time it worked to his advantage, without a hint of intellectual pretence. With the charming Florentine skyline as a backdrop, it was, honestly, a joy to behold. This for the mise-en-scène.

But what about the clothes? They were, surprisingly, normal — as in commercially viable and something you'd actually want to wear, not the painstakingly curated stuff that's just good for magazine editorials and the occasional diehard fashionista. At a press conference held in the morning, Anderson said the collection was all about himself being in Florence, like a tourist, and an idea of normality. Which, in fact, explains the naive jumpers, slouchy jeans, sturdy perfectos, trenches and all the rest.

On the year of the tenth J.W. Anderson anniversary, it was also a way to reaffirm, in a more palatable and direct way, the brand's codes: the high visual impact and the idea of outfit as collage, in particular. And yes, the anchor as a logo, and the undercurrent of slight Prada-isms, too, which this season took the shape of childish heart prints. Anderson talked about the collection being sensual and sexual, in the sense that there was more skin on show, and the result was actually lively. The idea of sensuality associated with Italy is, of course, a big cliché — but a good one. Or better, a normal one.