Dao-Yi Chow and Maxwell Osborne continue their uncertain and uneasy move into womenswear. 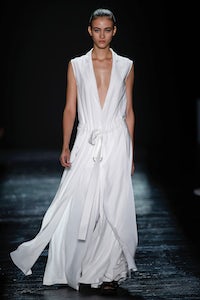 Dao-Yi Chow and Maxwell Osborne continue their uncertain and uneasy move into womenswear.

NEW YORK, United States — One of Dao-Yi Chow and Maxwell Osborne’s most winning qualities is their honesty.  From the moment they launched their womenswear line, they have acknowledged its riskiness. Chow admitted to feeling “uneasy” the night before he and Osborne presented their new women’s collection for Public School.

It’s not surprising. If the line was once a direct extension of the menswear which established their reputation, it has now become much bigger and more central to Public School’s business. “Now we’re drawing men into our woman’s world,” said Osborne.

And there’s the risk. The womenswear simply isn’t up to the job just yet.

For Spring, the duo imagined the Public Schoolgirl traveling round the world and arriving back in New York with a sack of inspirations and a shot of spiritual enlightenment. We wanted to elevate the idea of femininity,” Chow explained, and there was no doubt that the show had a distinctly reverential tone. Public School’s signature volumes took on an Asian tinge, with sweeping kimono-like shapes, a sober palette of white and shades of blue, and wrapping, drawstrings and streaming ties all contributing to a monastic mood. You could even picture a Japanese monk labouring over a print that was a little like a calligraphic exercise in feathery brush strokes.

In this context, a white knit tennis dress looked incongruous. In fact, its presence — along with some other abbreviated oddities — hinted at the fundamental uncertainty Chow and Osborne seem to feel about their womenswear.

It wasn’t only the designers who were left feeling a little uneasy by this collection. 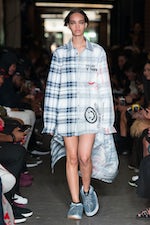 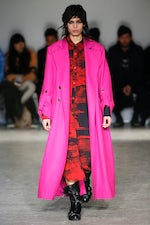 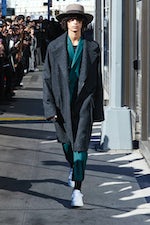 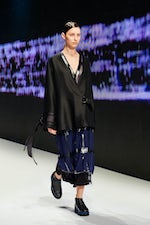