The collection brought to mind a box of candies, metallic wrappers and all. 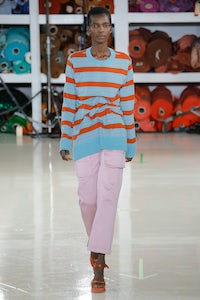 The collection brought to mind a box of candies, metallic wrappers and all.

NEW YORK, United States — If there had been a People’s Choice award given at New York Fashion Week, Sander Lak would have been a clear candidate. At week’s end, there were all sorts of fans testifying to the sensuosity of his clothes. It was partially achieved by something as simple as a tuck, a handful of fabric tugged into a waistband to create a little recognition of the body. “I used to do it as a teenager,” said Lak. “I didn’t like to hang loose.”

Though it wasn’t just the tuck. There was a lot of pulling in this collection too, casual twists and drags to one side that suited the washed, satin-y fluidity of the fabrics. But what the fans ultimately endorsed was Lak’s colour palette. He showed in his studio, against walls lined with multi-coloured bolts of fabric, and when the clothes he cut from that cloth paraded down the catwalk at show’s end, they looked like a box of candies, metallic wrappers and all.