The collection felt like the best-dressed party in Laurel Canyon on any Monday night circa 1973. 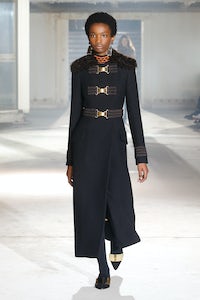 The collection felt like the best-dressed party in Laurel Canyon on any Monday night circa 1973.

PARIS, France — When Lazaro Hernandez and Jack McCollough described their new collection as “a voyage through a borderless world”, they could have been talking about their own journey as designers. This was their second show in Paris and, whereas last time they did a thorough research job on local French artisans, this time, McCollough said, “it felt right to dive back into the US.” Showing in Paris at the same time as haute couture made them wonder what the idea of couture stood for in America.

On either side of the Atlantic, it came down to the same thing: the hand. So this collection was an artful celebration of the American handcrafted, with Hernandez and McCollough falling under the spell of Sheila Hicks, the Nebraska-born artist who used her handloom the way other artists used their canvas and brushes. Crocheted dresses, gilets macramé-ed from leather “spaghetti”, tiedyed velvet tops, hammered metal neckpieces, an intricately diamond-patterned patchwork coat…. It was like being transported to the best-dressed party in Laurel Canyon on any Monday night circa '73.

But this was an eclectic, international world, remember, so maybe some of the women at that party had been to London and picked up a little Ossie Clark. The fluted, tiered dresses here had Clark’s elongated languor. So did the ensemble with the nipped double-breasted jacket and wide-legged velvet trousers. Hicks, Clark, Hernandez, McCollough…a dreamy symbiosis.