At Maison Margiela, The Truth of Clothes

John Galliano is no longer interested in being The Latest Thing. He’s committed to the timelessness of couture. 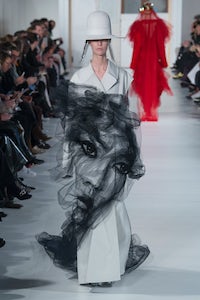 At Maison Margiela, The Truth of Clothes

John Galliano is no longer interested in being The Latest Thing. He’s committed to the timelessness of couture.

PARIS, France — John Galliano took on a huge subject with his Artisanal collection for Maison Margiela: the way that “reality” is now veiled in a technological farrago, left wide open to interpretations as ludicruous as “alternative facts.” Next stop, the renaissance of the Flat Earth Society. Those specific lunacies wouldn’t have been on his mind when he was working on the collection, but he offered a very convincing, eerily beautiful and ultimately uplifting refutation in clothing.

Essence: that was the core. The truth of clothes, distilled to their skeletal being. Galliano called this peeling process décortiqué. He’s always been good with a French turn of phrase. Like boulversé, the notion of topsy-turvy which has served him incredibly well over the years. That worked here as well, the way that a tweed jacket and a bias-cut crepe skirt were matched. “Fusing memories,” Galliano called it. Or, as the back of one look announced, in naïve embroidery, “Things you can’t believe.”

That message might seem out of touch with a season whose hunger for the rational is glaring, but the collection’s emphasis on craft was utterly in keeping with the reverence for the hand that currently motivates fashion’s most interesting creators. The most fabulous thing Galliano said in his pressnotes was that this was a type of “modern-day folklore.”

It was there in the embroidery, the stitching, the errant composition of the looks. Joan Baez crooned Diamonds and Rust on the soundtrack to make the point even sharper. That aural detail pulls you up sharp, makes you realise that John Galliano has absolutely no interest in being The Latest Thing. Been there, done that.

Instead, he’s committed to the timelessness of couture (remember, Artisanal is just that). So, if selfie culture is all about building up a perfect image in the moment, with filters, Galliano deliberately de-filtered his designs. The most perfect moment in the collection was the face constructed in tulle by artist Benjamin Shine, bursting out of a long white coat. Chaos is the new perfection.