The Utter Charm of Brandon Maxwell

The designer meticulously constructed an aesthetic for the kind of glamorous events that an embryonic fashion talent might fantasise about in his bedroom at night. 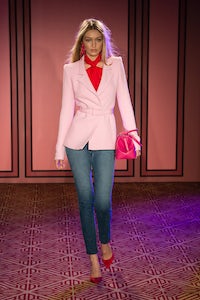 The Utter Charm of Brandon Maxwell

The designer meticulously constructed an aesthetic for the kind of glamorous events that an embryonic fashion talent might fantasise about in his bedroom at night.

NEW YORK, United States — You can tell that Brandon Maxwell’s rapid-fire self-deprecation is the kind of defence mechanism – wit as a weapon — developed by an uncool kid who dreamed big in small-town Texas. “I was a kid who really wanted to go Somewhere,” he said after his show on Friday night. Hence, an aesthetic based on dressing for Somewhere: looks meticulously constructed for the kind of glamorous events that an embryonic fashion talent might fantasise about in his bedroom at night. Maxwell cried when he saw the first big ballgown he ever designed in its finished state. And, even though his new collection widened its periphery to include — shock! – jeans, he was still insisting, “I don’t know if I’ll ever take the dive into total sportswear.”

His show was in the Doubles Club, a famous niterie in the basement of the Sherry Netherland Hotel. The venue was significantly smaller than his last. “That felt too big,” he said. “I felt exposed.” If the downsize added a slightly surreal quality – Karlie Kloss’s tulle-inflated leopard jacquard gown was so substantial and the runway so narrow she all but swept the front row off its seats – the intimacy emphasised another key element of the Maxwell story. There were at least 40 friends and family in the audience. As dressy as his clothes are – the pearl-embroidered pantsuit with the capelet, the yellow sheath, the taffetas and trains, and, passing for casual wear in this context, a fluffy white angora sweater paired with green leopard-print pants – they are grounded in his understanding of the women in his immediate world. They like to dress, he likes to dress them. “I love a woman who’s going Somewhere in the day, and also in her life.” There’s that Somewhere again. And Maxwell is utterly charming in his unshakeable faith in such a place. You can take the boy out of Longview, but you can’t take Longview out of the boy. “I’m from a small town and Karlie Kloss just kissed me!,” he gushed. A winner.