It was one of Browne’s most striking collections yet, melding the aching glamour of the greatest fashion photographs of the 1940s and 50s with his own obsessions. 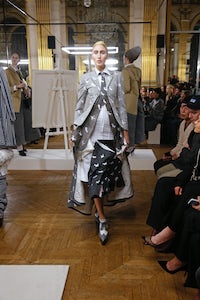 It was one of Browne’s most striking collections yet, melding the aching glamour of the greatest fashion photographs of the 1940s and 50s with his own obsessions.

PARIS, France — Thom Browne stores inspirations, like a squirrel does nuts. A couple of years ago, the Metropolitan Museum in New York showed 80 paintings by Elisabeth Vigée Le Brun, the 18th century portraitist who was Marie Antoinette’s favourite. Who knows at which particular moment it occurred to Browne that Vigée Le Brun’s imagined response to life in the 21st century might be the perfect launchpad for his new collection? All we know is that he did, and it was. And so we found ourselves perched in the magnificence of the Hotel de Ville, looking at 18th century waistlines and watching typically peculiar scenarios take shape in front of us as the main event – the stately procession of models in the new collection – unfolded.

Browne himself has always made art. The work on display down the venue’s median strip was his. Linear (more dotsy, actually), minimal, and coming to a gallery near you. He stocked that centre point with cone-headed women dabbing away at his canvases with studied indifference. Meanwhile, living works of art with gilded heads patrolled the space around the “artists." It might have been one of Browne’s most striking collections yet for the way in which it melded the aching glamour of the greatest fashion photographs of the 1940s and 50s with his own obsessions. Yes, he loves construction, but he also has showbiz in his blood. The performance aspect of his show on Sunday was as character-driven as any Broadway show.

It made me want to see more. No, really, the way the show was staged in the Hotel de Ville, the staggeringly ceilinged and sculpted offices of the Mayor of Paris, created a nagging suspicion that the real action was elsewhere in the neighbourhood. But that nag, that niggle are key elements of Browne’s shtick. There is no other designer who is as capable of making you feel uncomfortable – or even inadequate – because of your ignorance of what it is you’re looking at. You have to keep reminding yourself that Browne is happy for you to laugh as well.