Browne stitched garments together or took them apart to create something completely other. 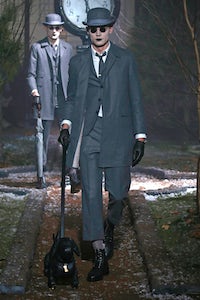 Browne stitched garments together or took them apart to create something completely other.

NEW YORK, United States — Thom Browne’s new women’s collection was a companion piece to the menswear he showed a month ago in Paris, same story — the history of a garment — but entirely different result. Where his men cherished and wore the same clothes until they fell apart, Browne imagined his women would go to ingenious lengths to renew their outfits. And a surreal ingenuity was certainly the foundation of this collection.

Like fashion’s own Dr Frankenstein, Browne stitched garments together or took them apart to create something completely other. He said the pattern-making was one of the toughest challenges he’d ever set himself. You could only imagine how tough when an evening dress sailed by with a lengthy train of jackets sewn together. Another dress unwieldily suspended an entire grey velvet, mink-trimmed coat down its front. But less showy effects were equally accomplished. The way a jacket’s sleeves were linked to form an inverted bustle, for instance, or grey flannel jacket fronts wrapped the waist to make a skirt. A cabled tennis sweater was expanded into an a-line dress. A striped cotton shirt devolved into a college stripe jacket. If the individual elements were familiar from Browne’s past forays into classic WASP dressing, the dressed-in-the-dark wilfulness with which he twisted them felt like he’d interrupted his own natural order. That was good.

There was simple feminine loveliness here as well — the pleated organza dress with matching cardigan and delicate pearl detailing, the polo dress of navy top and grey silk faille skirt — but, given Browne’s track record, it was tempting to see his latest outing as a comment on genders in transition. Its hybrid heart certainly resonated that way. The designer denied any such intent — as he usually does, when confronted by outré rationales for his work — and insisted that the items he’d drawn on were all classic womenswear pieces.

Curiously enough, for all its implied challenge to sartorial orthodoxy, this collection wasn’t nearly as disturbing as the farthest flights of Browne’s fancy have been, even if he did incarnate his dog Hector as a handbag and a stole. In fact, as technically masterful as it was, it actually felt rather bloodless and staid, which was possibly why Browne opened and closed his show with a scarlet woman, sallying forth in red silk upon which breasts and vulva had been crudely graffiti-ed. Like an ambassadress of the rude life that lay outside his sere, perfectly ordered winter garden. 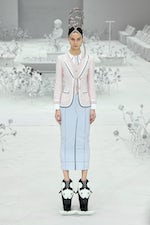 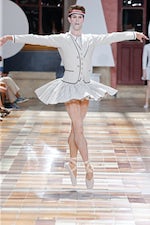 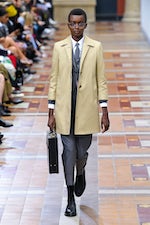 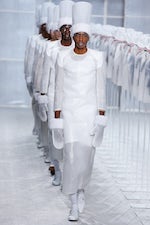