As an anniversary, today's show did not signal tremendous progress, but it had depth and the level of execution was almost couture-like. 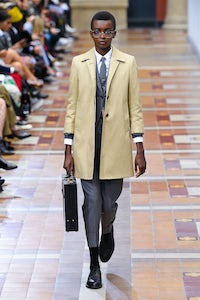 As an anniversary, today's show did not signal tremendous progress, but it had depth and the level of execution was almost couture-like.

PARIS, France — In January 2009, Thom Browne staged a memorable performance at Pitti Uomo in Florence. In the main room of the Istituto di Scienze Militari Aeronautiche, a troop of Thom Browne-clad replicants — all decked in identical grey outfits topped by beige Chesterfield coats, holding briefcases and wearing nerdy glasses — set at identical desks, typing away. By now we have all become familiar with Browne's brand of theatre: the slowness, the repetition and the cryptic meaning have been stretched in every possible way, sometimes hitting a nerve sometimes not. That show in Florence, however, was Browne's first in Europe, and somehow set the template for things to come.

Fast-forward to March 2019: ten years have passed and Thom Browne is staging another show in Europe, replicating that performance step by step. For those who attended, connecting the dots was natural. We're in Paris and not Florence, of course, and it's womenswear and not men's, but never mind: the moment was ripe for a celebration. Actually, celebration is probably too fancy a word: after all this is Thom Browne's world, and stern-ness is mandatory.

Yet, a lot has happened since 2009 through the endless exploration of that tailored suit in absurd proportions. The designer has added womenswear, for instance, giving his code much-needed breadth. Today's show sat along the usual lines. It was identical to the past but also different — just like the grey suits are always the same yet different. The pace was not excruciatingly slow, for a start, and that offered relief, while the clothes were a real wardrobe as opposed to the wonderfully wrought-out but ultimately utterly difficult show pieces of the past.

The level of execution was, as ever, top-notch, almost like couture. It made for an energised outing. To break it all down, the proposal was a face off between the masculine and the feminine: each full mannish outfit — jacket, trousers, coat — was replicated as a trompe l'oeil on a shapely dress, in a veritable feat of technical prowess. Otherwise, it was ladylike ensembles, and a number of pieces were perfect for the posh uptown lady.

As an anniversary show, this one did not signal tremendous progress, but it had depth. The soft, unstructured looks — a mild take on Thom Browne's severity — were best in line. After ten years of endless variations, getting away from that trademark stiffness to test new sartorial grounds could be a captivating challenge.