The designer's ingenuity was spectacular, but curiously chilly. 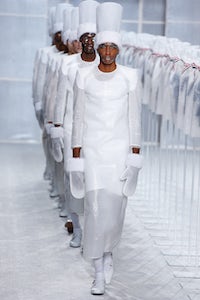 The designer's ingenuity was spectacular, but curiously chilly.

PARIS, France — My heart bled for trypophobes during Thom Browne’s show on Saturday. Anyone with a fear of bubble wrap would have been paralysed with dread. The set was lined with it, Browne’s customary platoon of acolytes paraded solemnly around the catwalk sheathed head to toe in it. And then Jack Frost danced out in a bubble wrap frock coat.

This archly synthetic paradise was quintessential Browne. So was his explanation. His company uses bubble wrap for shipping and this was a way to take something practical and make it into… something else? It had a tinge of Project Runway challenge, but the bizarre alchemy that programme often wreaks is a Browne signature. And here it was again, not just in the beautified bubble wrap, but in the tripartite essence of the show itself.

Browne is very taken by the way masculinity is turning into a movable feast. “I love the idea of guys wearing dresses,” he enthused. “It’s interesting to see how men are dressing, with an almost feminine, womenswear approach.” So what he showed was a proposal in three parts. “Good, better, best,” Browne called it. The first was relatively classic, a coat, a jacket and trousers (or sometimes a skirt), more or less recognisably male. The second part rendered the outfit as a trompe l’oeil one-piece, a sheath dress. The third exploded, upended and every-which-way-butted each piece of the first part to create a dada collage of clothing. These grew steadily more extravagant as the show wore on until what we were looking at was essentially a ballgown. The last one featured a corseted undershirt that was quite the match of the bubble wrap frock coat in terms of co-opting the banal. The ingenuity was spectacular, but curiously chilly.

The corset actually played a part in every step of the transformation. Browne was in love with the hourglass effect as a way to emphasise the process of feminisation. The models also wore lipstick and blue eyeshadow, held fast under the layer of Glad Wrap that smothered their faces (plastaphobia is a fear of Glad Wrap, claustrophobia is a fear of smothering). The effect was sinister, especially in combination with the singsong chant at show’s end — “You wish you were a bubble man.” Or maybe it was more sci-fi than sinister. Hence the chill. The plasticised faces had the passivity of androids, moving slowly in their alien re-interpretations of classic menswear as “Mars Attacks” soared on the soundtrack. Jack Frost returned to strip the bubble wrap shrouds from the long line of posts that ran down the centre of the catwalk. Underneath were tiny, perfect simulacra of every outfit we’d just seen. They looked like eerily shrunken souvenirs. Something to take home to Mama on Mars, perhaps.