NEW YORK, United States — What does it take to charm a lady these days? A trio of American designers, who dress real women (ok, really affluent women) for real days, are vying to work that out.

Gabriela Hearst is a natural host. For her fall runway show on Tuesday, the first since receiving a cash injection from LVMH Ventures, the designer laid out a colourful banquet lunch — hunks of bread slathered with butter, hunks of cubed meat wrapped in endive, hunks of broccoli dotted with sliced cumquats — that proved irresistible to a calorie-shy audience. In fact, a few serving platters looked to actually be empty when the 150 guests finally took their seats, the chairs formatted in a curved oval shape so models had to walk fast and close, showing movement in the clothes as they turned.

Movement was important to Hearst this season. Her muse was Maya Plisetskaya, the courageous Soviet ballet dancer who inspired designers Pierre Cardin and Coco Chanel, and the artist Marc Chagall. “I’m attracted to women who are extremely strong and triumph over adversity,” Hearst said at a preview in her Chelsea studio. “She had the whole system against her.”

Hearst is strong, too, and that resilience is reflected in the everlasting quality of her designs. Every element is deeply considered, from the padded herringbone quilting on a pair of knee-high boots — “I like sturdy,” she said of her footwear — to the rose quartz beads attached to a hand-smocked dress, which added a glint of light without too much shine. 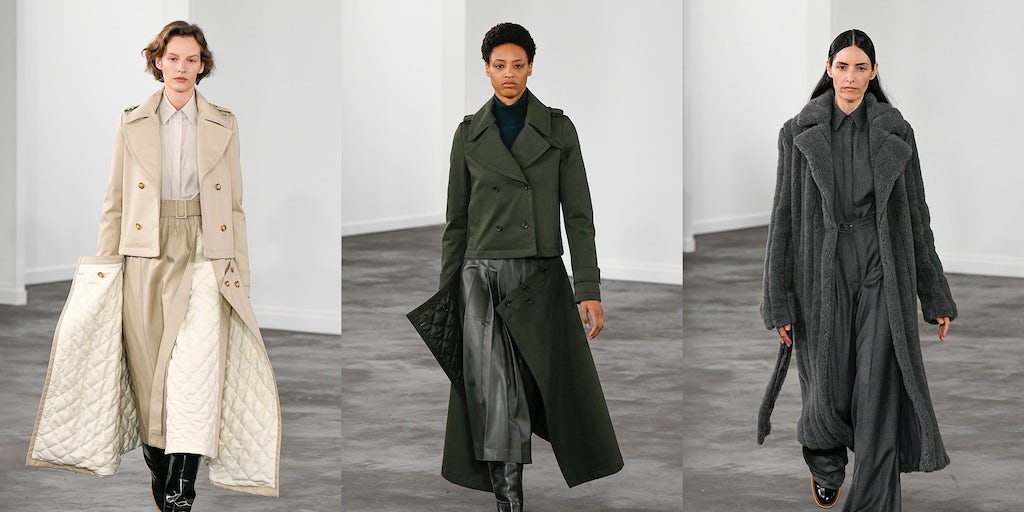 This season, the Uruguayan designer also introduced a new brand element: a replica of a Uruguayan coin from 1976, the year she was born, used as a button and strung together to make a jangly belt. In all, Plisetskaya’s influence wasn’t as evident in the sillhouettes, although there were hand-knit dancer dresses, butter-soft jazz shoes and décolletage-baring body suits.

Instead, the reference felt strongest in the protection it all provided the wearer. (Plisetskaya, after all, was considered a “defection risk” by the KGB. They monitored her throughout her life, even planting a microphone in her bedroom.) Whether it was Hearst’s long vest in quilted black nappa leather, the water-proof cotton trench with a detachable bottom quilted in creamy cashmere, or a jumbo cashmere scarf, handwoven in Uruguay into a multicolour check, these were clothes that offered security as well as beauty.

There was clear cultural heritage, without the heavy history of many European labels. Maybe that’s why LVMH, a company built on heritage brands, was so interested in Hearst.

Later in the afternoon, Rosie Assoulin was playing hostess herself, recruiting Eleven Madison Park wine director Cedric Nicaise to create pairings to match her vignettes. Assoulin has developed an interest in low-intervention wine — often called “natural” — over the past year or so, and has even toyed with the idea of making her own. It started with a skin-contact white from Austria’s Gut Oggau, a maker as well known for its bottles featuring sketches of beautiful humans as it is for the wine itself, paired with ivory double-faced duchess satin cargo trousers. 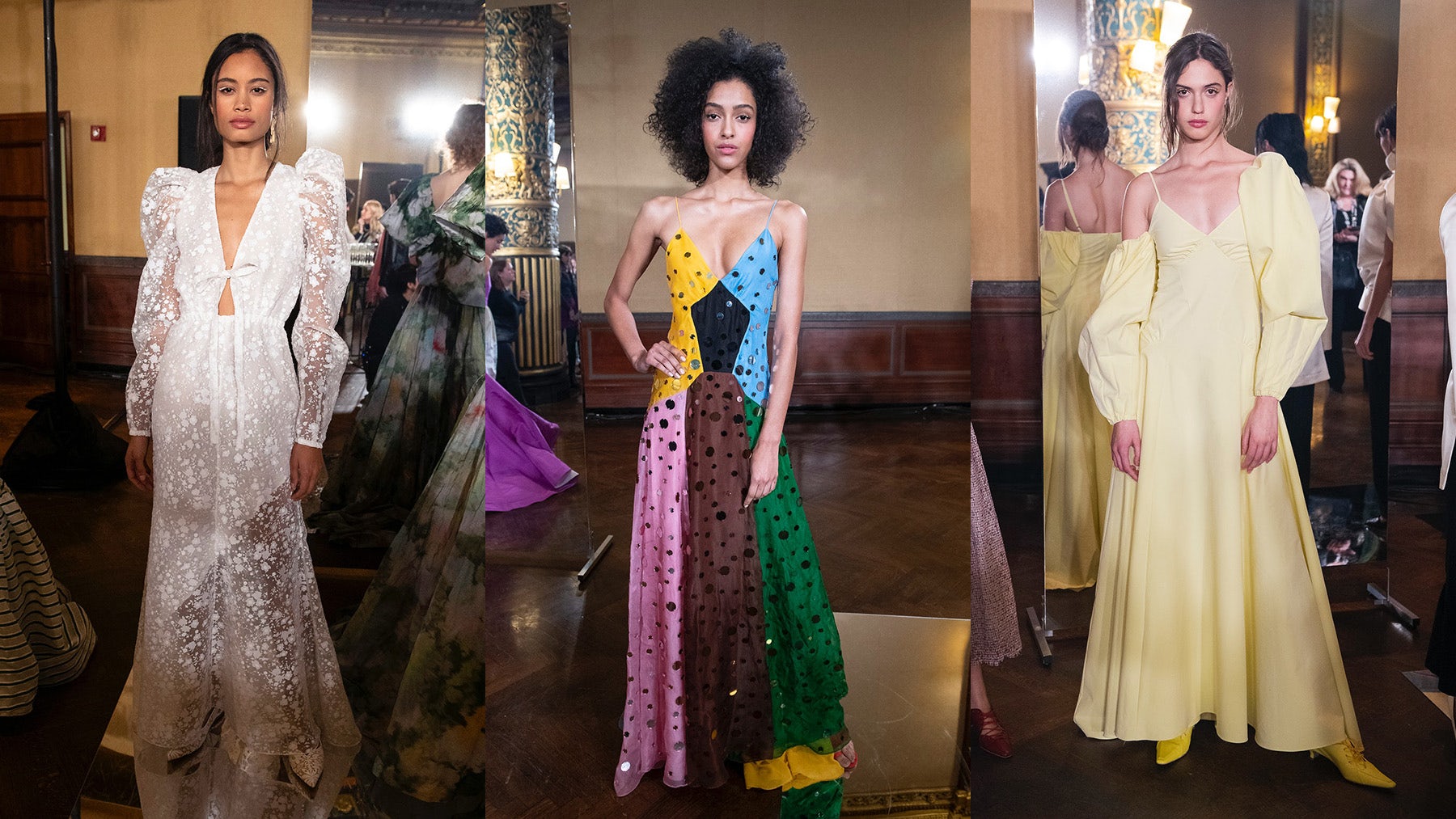 As the colours and textures of the clothes became more complex, so did the wine. By the time the tasting hit a juicy, deep pink rosé, guests were looking at ball gown printed in a watercolour painted by an artist Assoulin commissioned via Instagram. And for the finale, a metallic-foiled, checked suit and taupe organza halter dress covered in reflective discus that looked like Champagne popping.

Assoulin’s work is joyful and chaotic. There will always be women who thrill at the idea of wearing one of her dresses. And yet, she has such a talent for knowing what’s next, and it would be nice to see her create a few signature pieces each collection that she could offer as an introduction to her world. (For most people, her one-off-esque creations are very expensive propositions.) We want more of Rosie, not less.

Laura Kim and Fernando Garcia were installed at Oscar de la Renta two years ago now. They stumbled at first, perhaps feeling the heaviness of what it meant to carry on their mentor’s legacy. But they’ve managed over the past few seasons to begin better define their version of Oscar de la Renta. It’s not devoid of the namesake’s signature, but the look is more contemporary, taking on a certain worldliness, as Garcia called it, with the Spanish designer’s roots reflected in their own interest in Arabic design elements. 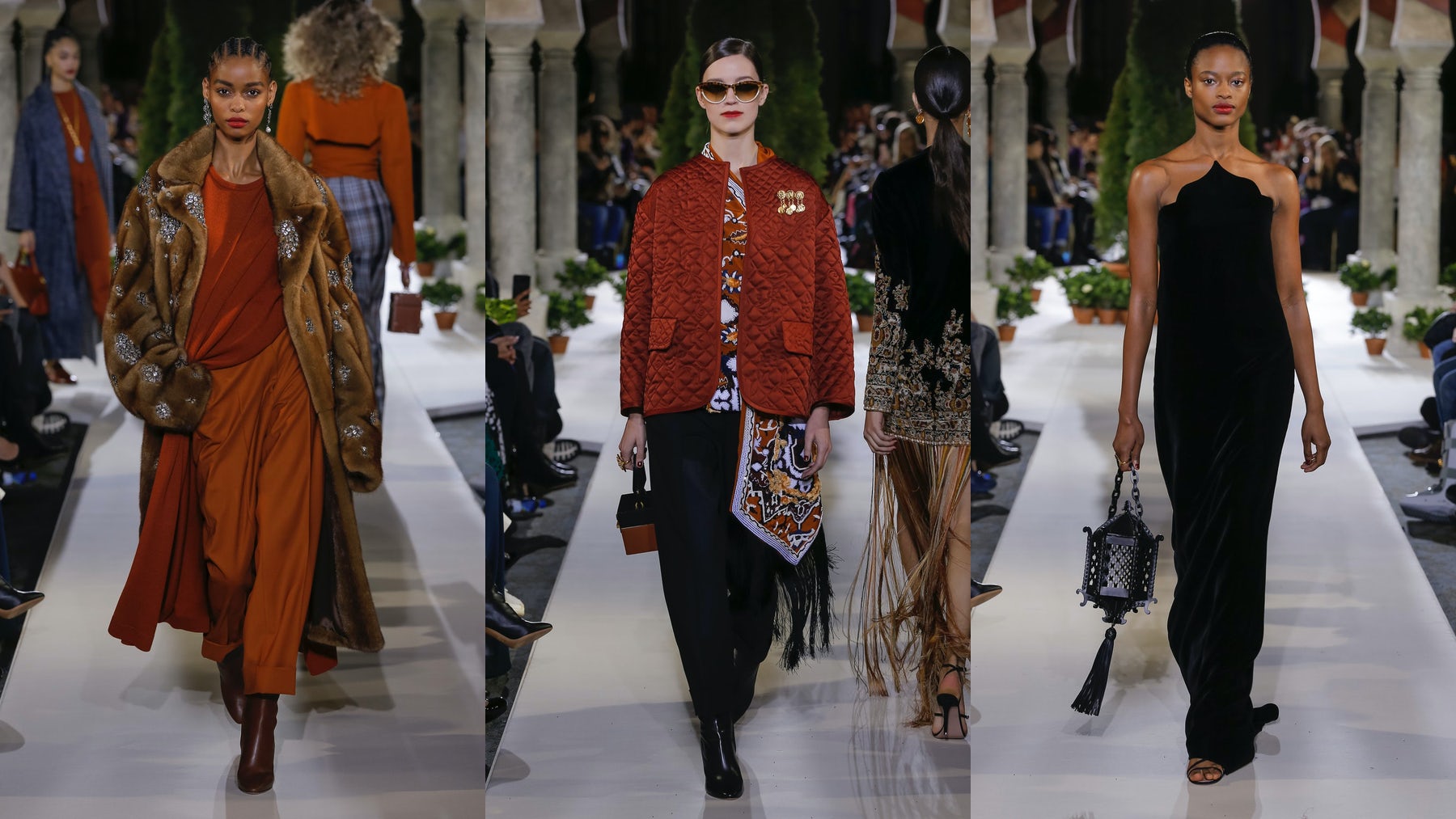 That idea started with the set, an homage to Cathedral de Cordoba, the mosque-turned Catholic church in the Andalusia region of southern Spain. It was a nice touch, especially given the lack of interesting staging in New York this week. As for the clothes? The warmly hued line-up, cohesive in tone, was filled with tapestries and textures. Consider the patchworked houndstooth coat, or a velvet black mini with a kaleidoscope fringe of unfinished embroidery. For evening, the designers combined silk chiffon or organza and velvet for a light effect, and cleverly nodded to the season’s quilting trend by stitching the occasional flower into a traditional diamond pattern. This was a crowd-pleaser.