BoF's editor-at-large travels back to Karl Lagerfeld’s Shakespearean Fairyland, when he transformed the Grand Palais into a forest right out of 'A Midsummer Night's Dream.' 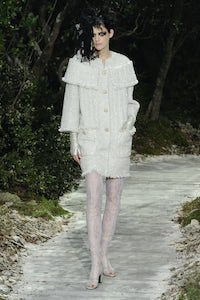 BoF's editor-at-large travels back to Karl Lagerfeld’s Shakespearean Fairyland, when he transformed the Grand Palais into a forest right out of 'A Midsummer Night's Dream.'

I wonder how Gabrielle Chanel would feel about her name becoming inextricably linked with imperial fashion extravaganza. The humility, the functionality of Chanel’s original proposals evolved under the aegis of her interpreter Karl Lagerfeld into a platform for enormous spectacles, the likes of which there was no precedent in the fashion industry.

Mark that word “industry." As the new century scrabbled into shape, fashion scaled up and up and, with the onslaught of the Internet, the competition for eyeballs became gladiatorial. Which took deep pockets… and the deepest pockets in the business were surely the brothers Wertheimer, owners of Chanel. I’m sure everyone who was there has their favourite all-encompassing Chanel environment, when the production team transformed the Grand Palais — the vaulted glass exhibition hall originally constructed for the Universal Exposition of 1900 — into a supermarket, an airport, a casino, a seaside resort or, most preposterously, a launchpad at Cape Canaveral. The rocket even appeared to take off at the finale. Cue scorched eyebrows in the front row. And how could I overlook the The Iceberg, Lagerfeld’s Edmund Hilary moment? Q: Karl, why did you drag an iceberg from the Arctic Circle? A: Because I could!

But I’ve found the cold light of hindsight drawing me to shows that felt more reflective of the man himself: his own melancholic awareness that the inexorable passage of time would eventually subsume everything he’d ever achieved, just as it did the art and literature he loved. Nothing — or very little — would remain. And, thanks to COVID-19, Lagerfeld’s instincts have been thoroughly compounded. His profound distaste for the self-importance of humankind was always one of his most winning qualities.

Which, of course, adds a peculiar irony to the grandiosity of those Chanel shows. The one that lingers with me as my favourite was, for all its innate folksiness, equally culpable. Good Lord, Chanel moved a whole forest into the Grand Palais, oak by oak, pine by pine, for Spring/Summer 2013’s couture presentation. And in the midst of the trees, there was a small classical wooden amphitheatre. “No, neo-classical,” Lagerfeld corrected. It wasn’t Ancient Greece he had in mind, but Weimar, the German city which, in the 18th and 19th centuries was home to the arch-Romanticists Goethe and Schiller and the composer Liszt. In the early 20th century, it became a hub of radical modernism, focused on the Bauhaus School, but it was also an early centre of Nazism. Maybe you can’t imagine a fashion show being able to draw such disparate elements into one startling whole. Lagerfeld could.

There’d been early intimations of a Chanel take on “A Midsummer Night’s Dream." We ambled through the woods on a pine-needle-strewn boardwalk. There was birdsong, and a magical morning light. The music was Ravel’s “Daphnis and Chloe." In this context, you could almost configure it as a fin-de-siècle version of “All You Need is Love.” But Lagerfeld added his own edge — literally. Almost all of the 69 looks featured a dramatic shoulder, deliberately designed, he said, to frame the swan-like necks of the models. Every so often, he would insert a yoke of sequins or silver leather, to up-light the face. “Shine is beautiful for the face,” he insisted.

Sometimes, the shoulders on pastel tweed suits looked articulated, like armoured capelets. Then, on draped dresses, they resembled soft fichus. That elusive integration of different eras was quintessential Lagerfeld. So were the echoes of the rigorous Bauhaus ethos, translated into the eveningwear’s strict columns, laboriously sequinned in monochrome black and white. An occasional issue with Lagerfeld’s collections for Chanel was their orgiastic excess. Sometimes too much was more than enough, but this collection struck a resounding chord for its intense discipline. Until it didn’t — and even then it thrilled, as discipline tipped into a Miss Havisham-like flirtation with elegance torn and frayed. The final looks featured feathers, fluffed, mounded, trailing. If this was Lagerfeld’s version of Shakespeare’s Fairyland, then these were his fairies. But they were wearing black leather thigh-boots and gauntlets, a sinister flourish which hinted at Weimar’s tragic destiny as the place where German idealism died under the Nazi jackboot.

This being couture, there was a bride. Two, actually. The political backdrop for the show was the furious debate in France about gay marriage. Rarely one to engage in polemics, Lagerfeld made his leanings quite clear with his finale. Kati Nescher and Ashleigh Good walked hand in hand in ethereal wedding dresses, Karl’s diminutive godson Hudson Kroenig beside them as their ringbearer. Sweetly poignant.

But what I walked away with was how melancholy the whole thing felt. Lagerfeld’s musicologist Michel Gaubert was always able to crystallise Karl’s moods, and when his soundtrack shifted from Ravel to the fey electronica of a British techno artist named Andy Stott, the mood also shifted, into dreamy dislocation. Throughout, the models were accessorised with headpieces of tattered chiffon feathers. Their eyes were also ringed with feathers, like they were birds in the forest. "There's nothing more elegant than a certain kind of melancholia," Lagerfeld mused after the show. That didn’t sound like a sentiment that would have any particular resonance with the coterie of high-profile young ‘uns whom he’d been able to attract to Chanel. He seemed to agree when he defined his collection as “Art de vivre, not joie de vivre.”

Bear in mind all this took place just one month after Lagerfeld had transported us to Scotland for his pre-fall spectacular in Linlithgow Palace, where Mary, Queen of Scots was born in 1542. She was the subject of one of Schiller’s most famous plays, so there was a certain synchronicity in Karl’s Weimar-influenced presentation. But more than that, there was the simply prodigious feat of staging two elaborate fashion pageants so close to each other and so radically different in tone, never mind geography. “I always feel I can do better,” said Lagerfeld, dismissively brushing off the post-show praise. “The minute you think you did it, you should stop.”

And he didn’t stop, until relentless time ran out.

The images in this review are courtesy of Chanel.