Virtually penniless, a string of fashion fairy godmothers granted Galliano an opportunity to spin his magic once more. What the audience saw was a mere 18 looks: still one of the most convincing arguments for “less is more” that BoF's editor at large has encountered in his more than three decades in fashion. 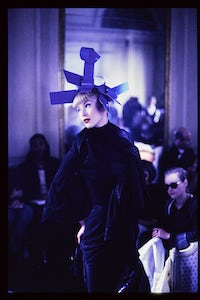 Virtually penniless, a string of fashion fairy godmothers granted Galliano an opportunity to spin his magic once more. What the audience saw was a mere 18 looks: still one of the most convincing arguments for “less is more” that BoF's editor at large has encountered in his more than three decades in fashion.

An antique key is talismanic. If you could find the door it unlocked, how might your life change? John Galliano’s invitation for his Autumn/Winter 1994 show was exactly that: an ancient key, wrapped in a handwritten letter that seemed almost as old. When I went to the time and place specified on the note, I found myself outside a grand but slightly rundown 17th century hôtel particulier on the Rue Férou, on the Left Bank of Paris. The initial air of abandonment was compounded by the interior of the building. There were chandeliers crashed on the floor. Dead leaves had drifted through the open windows. Had the owners fallen on hard times?

In a sense, that was the story, and we knew it. Galliano had been loaned the building as a show space by Portuguese socialite and fairy godmother São Schlumberger. She was doing just fine, she’d left the house empty when she moved elsewhere. It was Galliano whose circumstances were straitened: penniless, sleeping on the floor of his friend, the model Marie-Sophie Wilson, no studio and no resources whatsoever to mount a show. But Galliano had friends in high places. André Leon Talley got his boss Anna Wintour involved, they reached out to John Bult, the chairman of Paine Webber, who, impressed by Vogue’s imprimatur, extended a $50,000 financial lifeline to the designer three weeks before showtime.

Three weeks! Talley set up a lunch with São (Portuguese sardines, so the story goes) to secure the venue. Once Galliano and his small team had somewhere to work, they performed small miracles. Limitations often fuel creativity. Take these examples: dictated by economy, Galliano chose a bolt of one single cloth for his collection, a black satin-backed crepe, shine on one side, matt on the other, which produced the illusion of a repertoire of fabrics. The white ermine jacket with the stand-up collar was a vintage piece, found in a market, flipped upside down, boulversé as Galliano would say, to create a dramatic effect.

Here’s another instance: capitalizing on the state of the Schlumberger mansion, Galliano inspiratrice Amanda Harlech worked with set designer extraordinaire Michael Howells to heighten the decrepitude, not only using dead leaves and drifts of rose petals, upended chairs and flea market fixtures, but also illuminating the building from the outside so that a cold dawn-ish light streamed through the windows, like the morning after the end of love. Galliano has always created a cinematic narrative to sustain each of his collections. This one picked up the story of the hoop-skirted White Russian Princess Lucretia from Spring ’94, fleeing from wolves and finding refuge in the heady transgressions of 1920s Paris.

Maybe it was the first time Galliano had worked with Howells. They would go on to collaborate on the most magnificent fashion spectacles of the 90s and beyond. It was the second time John worked with milliner Stephen Jones. Again, these were the early days of a collaboration that would inspire heady heights – and hats – of surpassing beauty. The contributions of Harlech, Howells and Jones were reasons why this financially strapped little production felt, even at the time, like the genesis of a different energy in fashion, a new atmosphere, a conceptual extravagance that would eventually be physically consummated by the budgets LVMH gave Galliano in his role as creative director of Christian Dior.

But on March 5, 1994, that all lay in the future. What we, the audience, saw were a mere 18 looks, still one of the most convincing arguments for “less is more” that I’ve encountered in more than three decades in fashion. Galliano wove together a few of his enduring signatures, the Japonisme in the embroidered obi belts, the bias-cutting of Madeleine Vionnet, the saturated glamour of Old Hollywood, 20s, 30s, 40s all at once. Ironically, the fact that he was so limited in his fabrics actually suited his obsession with haute couture. Didn't Cristobal Balenciaga, the greatest of them all, always show his newest proposals in black, the better to highlight the cut?

The models were the Olympians of their métier, the first-namers Linda, Christy, Naomi, Kate, Helena, walking for free…or maybe an outfit. (Like his peer Jean-Paul Gaultier, Galliano was an archivist’s nightmare. Paying models in clothes meant there was nothing left for posterity.) In that company, John’s famous backstage exhortation, “Maximum modelling!”, would scarcely be necessary. Jeremy Healy, John’s mate from St Martin’s, provided the music – 26 years later, he’s still Galliano’s soundtrackist. It was a mix as typically idiosyncratic as the ones that had made him a club favourite in London, entangling house music with explosive bursts of Nirvana, or layering Vangelis over the rolling rat-a-tat of a James Brown track. I had to laugh when I watched some of the YouTube clips of this show. The soundtrack most of them chose was something elegantly classical to match the equally elegant visuals. Galliano and Healy were much too counter-intuitive for anything so obvious.

After his Spring extravaganza, the rigour of Galliano’s Autumn/Winter collection was a shock. Was severity ever so lush? The black was broken only by the pink of Kate Moss’ truncated organza kimono and Christy Turlington’s fin-de-siècle goddess dress, the finale. “Pink makes me smile,” said a dazed Galliano post-show, “like the diamonds.” Real diamonds, a king’s ransom, winkled out of the jewelers on the Place Vendome by Amanda Harlech’s formidable powers of persuasion. The bodyguards for the gems congregated on the fifth floor of São’s mansion for the duration of the show.

Manolo did the heels, matched to seamed black stockings. That was a look tailor-made for the formidably limbed Nadja Auermann, a Brassai portrait come to life in her short black slip, clutch jacket and sculpted Stephen Jones cloche. If elongation was a subtext, it was amplified by Shalom Harlow snaking through the salons in a black tuxedo, coiling against doorways like Dietrich redux. Jones’ hats trembled with 18-inch hatpins, topped by ostrich pompoms, which he’d brought with him from London. (He was going to trim them, but John loved them long.) Julien d’Ys slicked the hair, and added the curled Kabuki headpieces, made from sheets of plastic bought in the stationery section of a local department store.

“Linda got the hat,” Jones told me once. She also got the look, the cropped kimono embroidered with roses at the waist, accessorized with a necklace of blinding rocks. The outfit can now be viewed in the Kyoto Costume Institute (minus the diamonds, of course). The hat was lost in the chaos at the time. Jones made another one for the museum. He also went on to make lampshades for São.

Maybe it’s apocryphal but I’ve heard tell that André Leon Talley coined the term “fashion moment” to describe that March day. It certainly seemed to be a show that lodged itself in the memories of those who were there. Anna Wintour told Naomi Campbell it was her favourite show ever of all the thousands she has seen. “John and I were pinning Kate into her obi, two pairs of hands moving as one,” Jones remembered. “Afterwards we looked at each other and smiled, and I’ll always remember that smile.”

I know exactly what he meant. The show had ended. Clouds of dry ice were still drifting atmospherically around the building. I was groping my way towards an exit when the mist momentarily parted and there were Kate Moss and Johnny Depp entwined in front of me. We smiled at each other. I, too, will always remember that smile. Could Galliano have wished for a more appropriate envoi to the show that would turn out to be the first page in an extraordinary new chapter not just for him but for fashion? The key did unlock a door, after all.