BoF's editor-at-large travels back in time to the Italian designer's standing ovation-worthy Paris debut, which took place at the peak of his influence. 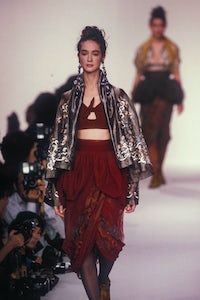 BoF's editor-at-large travels back in time to the Italian designer's standing ovation-worthy Paris debut, which took place at the peak of his influence.

The sensations of a fashion show are many and varied: sights, occasionally scents, the odd touch here and there, and sound, always. That doesn’t just mean the DJ’s contribution. Sometimes, the clothes themselves provide an aural undertow, swishing, rustling, crinkling or, for Romeo Gigli’s Spring/Summer 1990 presentation, tinkling, like wind chimes. Kirsten Owen, the model embodiment of Gigli’s fragile, romantic ideal, appeared on the runway in an outfit wrapped in a fringe of large glass beads from the island of Murano, in the Venetian lagoon. With her long pendant earrings and glass diadem, she could have been the Byzantine Empress Theodora. And she chimed as she walked, until the beads began to shatter.

Or did they? The dream-like transport of the entire show, heightened by Liz Fraser’s angelic voice soaring on the soundtrack over the gilded guitars of the Cocteau Twins, was such that my total recall of the night has always been shaky. But I do remember the standing ovation for Gigli’s Paris debut. It set the impassive stone walls of the Cour Carrée, the huge courtyard in the Louvre, ringing. And the cheering resounded down the Rue de Rivoli, so the legend goes.

The “dream” has been the default option for more designers than I care to recall, as though their work exists, in their own eyes, as an exalted alternative to the quotidian world. It’s a fanciful notion. Daunting too. How many really rise to that challenge? Those who do actually master transcendence are marked by genius.

Gigli was intimately acquainted with at least a few such masters from childhood. His mother Alfa, an Italian contessa, was dressed by Dior and Balenciaga. The sculptural form of her clothes appealed to her son, though he settled on architecture as his future. He was 18 when she died, followed soon after by his father Ancora, an antiquarian book dealer. The orphaned Romeo dropped out of architecture school and spent the next 10 years as a global nomad.

He launched his own fashion collection in 1983, after he’d resettled in Italy. Asked to name his favourite designer, Gigli answered “Frank Lloyd Wright,” but his designs drew as much from the art and history in his father’s books. That was the revelation of his Spring/Summer 1990 presentation for people who’d never encountered his work in Milan. Did you ever see a dream walking? Well, we did.

Italian fashion in the late 80s was defined by the rivalry between Armani and Versace. Gigli was so radically different from both he was immediately hailed as Milan’s designer of the future, “the Armani of the 90s,” even. So you can imagine the level of anticipation for his first show in Paris. It’s challenging now to look at the images and try to conjure up a time when such a fantasia could ever have been considered a viable surrogate for the structured “reality” proposed by Giorgio and Gianni.

But the turn of a decade is often a golden transitional moment. Power suits and power shoulders had fallen from favour. Gigli offered a new silhouette: cocoon coats, and cutaway jackets that skimmed the body, with shawl collars and soft, “real” shoulders; high-waisted trousers that were as skinny as leggings; skirts with a tulip, or heart, shape that swaddled the legs. And, always, flat velvet slippers. (One pair was crowned with a silk rose whose stem trailed away up the model’s calf.)

At the time, though, it was the fabrics and the colours that truly blew tiny minds. Jewel-toned silks (“Rothko reds,” apparently), rich, earthy velvets, artisanal crochets, shadowy chiffons and gilded gauzes.…Many of the fabrics were said to be elasticised so Gigli could dispense with seaming or linings.

And then there was Kirsten Owen in her tinkling glass. Her astonishing career, which has now successfully straddled four decades, launched with Gigli and his favourite photographer Paolo Roversi. On that Paris runway in October 1989, Owen really was the face of fashion on a new threshold.

That’s just how it worked out for her, but for him, it wasn’t to be. Within a couple of years, the Gigli dream had evaporated in a fog of legal acrimony. Small consolation for him that he left this moment of supernal beauty. But he did, in fact, leave another, more substantial bequest to the future. Right after his Paris show, Gigli hired a young fashion student named Alexander McQueen as an assistant. Feel free to believe that this was McQueen’s early education in the potential for poetry in fashion.