Tim Coppens' nostalgic, spirited collection, inspired by his youth, was one of the standouts of the week. 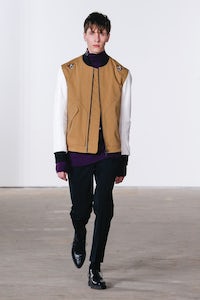 Tim Coppens' nostalgic, spirited collection, inspired by his youth, was one of the standouts of the week.

NEW YORK, United States — At the time of writing, New York Fashion Week: Men’s isn't quite over. But it’s fairly safe to say that Tim Coppens wins. On Wednesday night, the Belgian designer turned out a nostalgic, spirited collection. It spoke, in particular, to show-goers with youthful memories firmly planted in the late 1980s and early 1990s. For Coppens, the season’s inspiration came not from a single thought but a string of memories: hitchhiking to Barcelona when he was 17, the influence of Detroit techno on Belgium’s music scene and skate culture. “Having ‘Welcome to the Jungle’ on a tape recorder when you’re, like, 12 years old, riding to the skate park — I wanted to communicate all of it. Those layers are there," he said backstage after the show.

Coppens used the words “DNA of the brand,” to describe what he was trying to do. But it wasn't necessary. It's clear these designs came from the heart. While flight jackets are currently the margin-driver of choice in menswear, Coppens did it best in baby blue satin, worn with a red-and-black striped sweater and leopard-jacquard trousers. The collection’s expert layering made all the difference: a half-zip plaid shirt worn over a turtleneck; a kurta tunic slipped beneath a ribbed-collar varsity coat; a white hoodie hidden under a field shirt patched with satin pockets. The details — embroidered bird motifs, football-lace stitching and sealed-up seams on the inside of a parka — were a pleasure to uncover. And yet, this wasn’t an overly stylised or retro-themed offering. The pieces conjured feelings of nostalgia without ever looking like they could have been plucked from an old polaroid.

It would be remiss not to mention the equally impressive women’s clothes, which the designer showed alongside his men’s. Great moments included a black track jacket — which was covered in red-and-white Swarovski crystals stacked up like a Tetris board — a zip-up a-line denim skirt with felted pockets and a number of double-striped ski sweaters.

Why aren’t we all wearing Tim Coppens? It might have to do with where he shows, as his aesthetic feels more in line with what his European counterparts are doing. But he seems to prefer New York and this men's fashion week certainly needs him.