A Stake in the Ground

If Todd Snyder wants to be the 'next great American designer' he has some work to do. 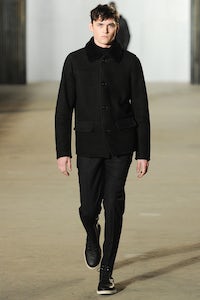 A Stake in the Ground

If Todd Snyder wants to be the 'next great American designer' he has some work to do.

NEW YORK, United States — Todd Snyder had a lot riding on his Thursday night show, which closed the Autumn/Winter 2016 season of New York Fashion Week: Men’s. This was the designer's first presentation since his company was bought by American Eagle in November 2015 for $11 million. The fruits of the partnership will be on display this September, when Snyder opens a flagship store in Manhattan. “They want me to be the next great American designer,” he said backstage before the show. “The goal this season was to put a stake in the ground and say who I am. Who the collection is going to be.”

To do that, he showed 48 looks. And, yes, there were some handsome pieces. The well-proportioned velvet tuxedo was reminiscent of pieces the designer has made for the red carpet, where he has been championed by stylist Ilaria Urbinati. And the tweedy ice blue sweater with a matching scarf and olive drab corduroys appealed for everyday wear. Snyder, who trained as an architect, enjoys the technical nature of designing outerwear and there were some decent choices here, including a parka lined in blaze-orange nylon and a textured boiled wool topcoat in just the right deep, dark shade of navy.

But truth be told, save for those few moments, the collection was bland.

Snyder's deal with American Eagle is evidence that big retailers believe in the potential of the menswear market. The designer has an accessible aesthetic, which is especially important in the US, where most men are not adventurous dressers. But it might be a little too accessible, too undifferentiated. Why would a man buy Snyder's pricier clothes over what he might find at J.Crew? (Where, by the way, Snyder used to be head of men's design.)

In the end, the issue lay not with his decision to show so many looks, but with their execution. You can't build a brand on a sea of cargo pants unless they are the very best cargo pants, and Snyder just isn't there. It would be nice to see the designer work on developing not just key pieces, but a real story that can be told visually time and again. Ralph, Calvin, Tommy: they all exist because of their brand stories. For Snyder to join them, he needs to open up. 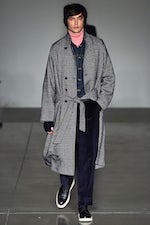