In a turning point, Alessandra Facchinetti referenced the iconography of rock n roll rebellion shown on a band of tomboy-ish girls. 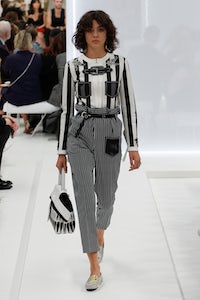 In a turning point, Alessandra Facchinetti referenced the iconography of rock n roll rebellion shown on a band of tomboy-ish girls.

MILAN, Italy — It's hard to believe the impact the original Tod's driving loafer has had on the Italian way of dressing. It is the emblem of a certain bourgeoisie and a coveted object of desire for those who aspire to be like them. When the brand's women's collection was launched a couple of years ago, creative director Alessandra Facchinetti built its whole image on the same bourgeois principle, adding her own proclivity for a certain sweetness, as well as a stress on craft. Her idea of the Tod's woman is full of sophistication and nonchalance, with more than a passing nod to the visual language of Italian modernism.

But today's show marked a turning point towards a more realistic direction. Facchinetti referenced the iconography of rock — think biker jackets and guitar straps — to dress a band of decidedly tomboy-ish girls in intensely decorated leather blousons, paper bag-waist pants, studded skirts and, for the first time, denim. The goings got a lot more sporty and masculine than usual, which gave the show a vital boost of energy.

The iconic loafer, meanwhile, underwent a process of embelishment, which added a new layer to the familiar bourgeois base. All in all, this was a mature outing for Facchinetti. She could have pushed the rebellious element more, however. Then again, she's not to blame. Tod's is ultimately about aspiration, not rebellion. 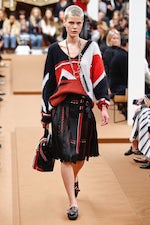