For Spring, Ryan Lobo and Ramon Martin used the beauty of dance and a technicolour palette to great effect. 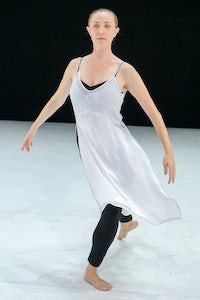 For Spring, Ryan Lobo and Ramon Martin used the beauty of dance and a technicolour palette to great effect.

NEW YORK, United States — Runway shows exist, in part, so attendees can see how clothes move on real bodies. It’s no surprise then, that designers employ dancers now and again to showcase their wares. Tome designers Ryan Lobo and Ramon Martin have spent the past nine months developing one such concept with their friend, the New York-based dancer and choreographer Pam Tamowitz, whose team twisted and turned in their designs around a small village of models dressed like a rainbow.

The mission, to make “animated” clothes that would expand and contract with each leap across the floor, gave the collection a focus. Lobo and Martin freely admitted mining their archives to achieve the season’s lineup. (It was something of a retrospective both for them and Tamowitz.)

A few pieces, like their twisted-front shirt dress, could have probably remained in Fashion Week retirement for a while longer. (While the style may still be a retail hit, it doesn’t move the Tome story forward.) However, multicolor accordion pleating was sharp and graphic. Lobo and Martin do “goddess” well, and there were plenty of looks worth of that moniker in the collection.