Was it the can’t-miss moment of the week? Perhaps not, but it certainly felt like a fairytale brought to you by power duo Marc Jacobs and Katie Grand. 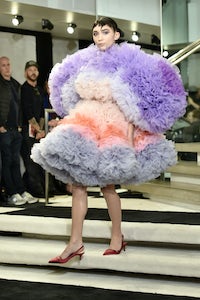 Was it the can’t-miss moment of the week? Perhaps not, but it certainly felt like a fairytale brought to you by power duo Marc Jacobs and Katie Grand.

NEW YORK, United States — Fashion’s you-had-to-be-there moments are few and far between these days. Especially during the New York shows, which offer plenty to look at but not always much to think about. Marc Jacobs, whose runways are nothing if not thought-provoking, took it upon himself to inject some electricity into this season’s dull schedule, introducing Japanese designer Tomo Koizumi at his Madison Avenue store on Friday night.

The main entrance to the shop opened to the backstage, where the Marc Jacobs dream team — Katie Grand styling, Anita Bitton casting, Pat McGrath painting faces, Guido molding locks — whipped up frothy looks. In the basement, guests stood quietly under the white lights, their backs to the walls, hoping something magical might happen. 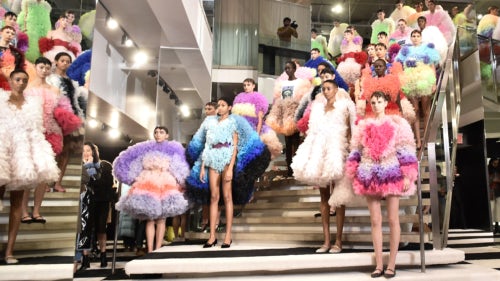 “I was once young, too,” Jacobs told BoF. “I will never forget the support and encouragement I received.”

It’s unlikely that Koizumi, a working costume designer who makes pieces for Japanese pop stars and occasionally, Lady Gaga, will ever forget Jacobs or Grand, who discovered him on Instagram via Giles Deacon. “She has a lot do with helping navigate the details to make events like Tomo’s successful,” Jacobs said.

For his Fashion with a capital F debut, Koizumi sent models down the stairs in layers of short-cut Quinceañera tulle, domes and tubes and bulbs of fluff bursting with acid peach and soft lavender. They stepped gingerly but deliberately in Tabitha Simmons-designed Mary Janes, Velvet Underground's "Oh! Sweet Nuthin'" so quiet you could hear the cameras clicking. They accelerated when starry characters that play in the Marc Jacobs universe — including actresses Rowan Blanchard and Emily Ratajkowski — were suddenly front and centre. Gwendoline Christie closed the show with stage-actress energy.

Was it the can’t-miss moment of the week? Perhaps not, but it certainly felt like a fairytale. At a time when it feels like it would be particularly torturous to be a fashion designer, Koizumi appeared blissed out by the experience. All thanks to Jacobs and Grand for spreading a little sparkling dust.