At the end of a complex fashion month, BoF brings you the Top 10 Shows of the Season.

At the end of a complex fashion month, BoF brings you the Top 10 Shows of the Season.

LONDON, United Kingdom — From the rise of direct-to-consumer strategies in New York and London to Demna Gvsalia’s much-anticipated Balenciaga reboot in Paris, it’s been a challenging and complex season in a fashion industry in a state of major flux. BoF brings you the Top 10 Shows of Autumn/Winter 2016. 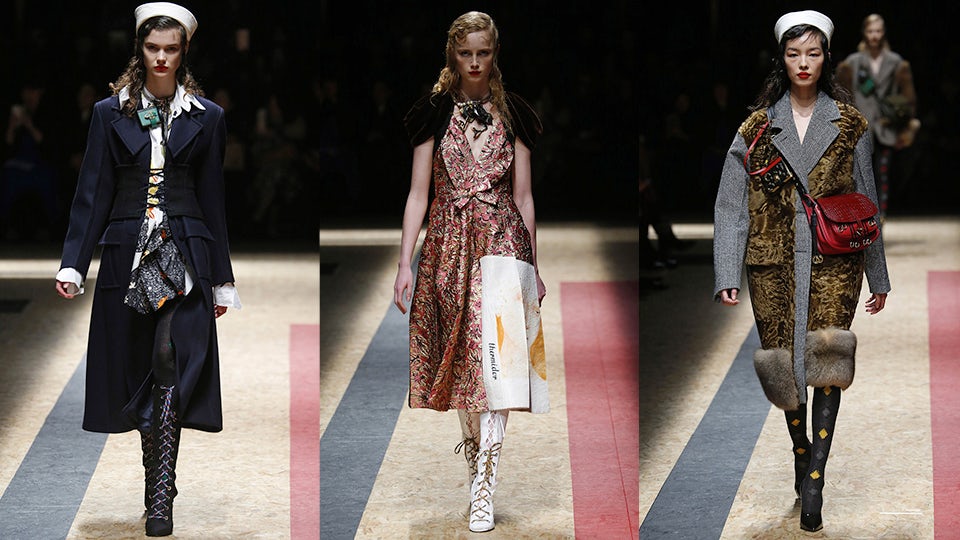 "In a tour de force, Miuccia Prada offered her own vision of a polarised world: the powerful and the weak, the rich and the poor — reflecting the huge upheaval in the air in fashion, a mirror of the wider world. Prada's women were wanderers, stateless, “vagabonds” she called them, roaming across different times and places, with their clothing functioning as a record of their journey. Mrs Prada has always been a political animal, but her politics have rarely been obvious in her work (or should we call it her art?). Her faith in fashion is, however, something quite distinct. Watching this latest collection, one thought irresistibly asserted itself: clothes make memories, memories make history." — Tim Blanks 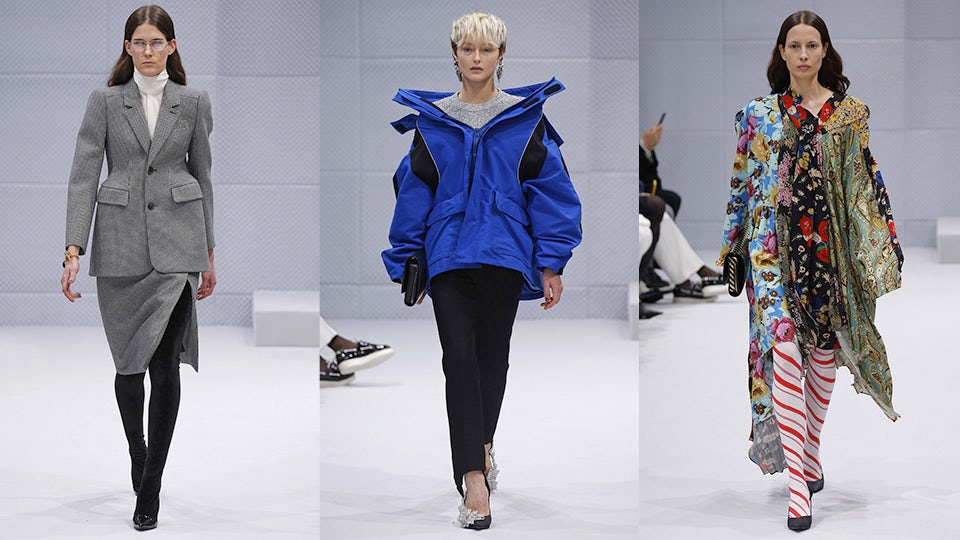 "The revelation of the Balenciaga presentation was Demna Gvasalia’s ability to translate the essence of couture into a ready-to-wear collection — without diminishing its purity or its emotional charge. It had the rightness of something we’ve been waiting to see forever. And it immediately cast a giant shadow over the entire season. Gvasalia’s fusion of past and present was so alchemical that the mutant streetwear which has been his calling card at Vetements was elevated, elegantly transmuted by the influence of classic couture. In Gvasalia’s own mind, there was a clear continuity: the last model in the Vetements show was the first model in the Balenciaga show. It’s all part of a process — grunge to glory. This is going to be fun." — Tim Blanks 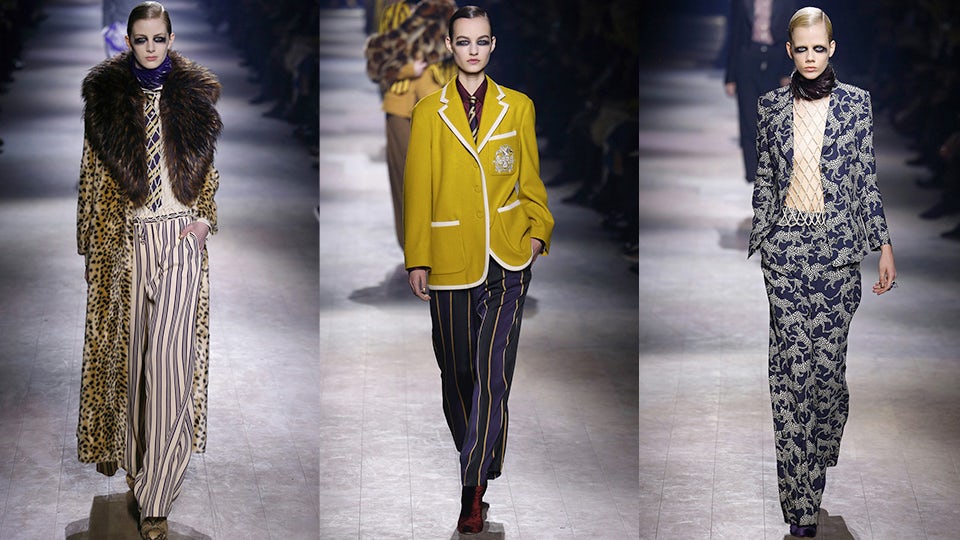 "Dries Van Noten presented a masterclass in fashion narrative inspired by the early 20th century amour fou of the poet Gabriele D’Annunzio and the Marchesa Casati, an eccentric who was, at one point, reportedly the richest woman in Italy. First look: his tuxedo jacket, shirt, bullion badge and slicked-back hair, her cheetah-spot pants and panda eyes. Going on, the symbiosis was gloriously realised with his elongated coats lined with her (faux) cheetah, his club jackets swathed in her eccentric furs, his cabled cricket sweater over a net of her pearls. “Things have to stand out now,” Van Noten insisted. “We need to dare, not shock, because that’s too easy, but be daring, be courageous.” So was the toxic beauty of his collection brave? It didn’t really feel that way when retailers began their post-show raves. Not brave. Just necessary." — Tim Blanks 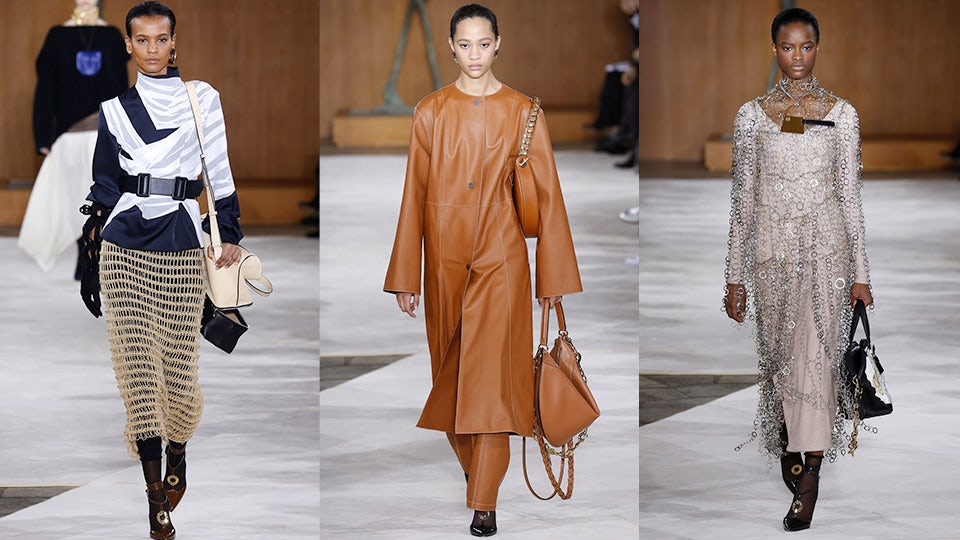 "Elevating the banal is something that obsesses Anderson. One of his first looks today incorporated a skirt made from rubber bands. A dominant motif was the pendants of cat faces and masks. Maybe it’s because Loewe is a Spanish company that we thought they might have been copies of Picasso ceramics. Loewe always represented an apogee of artisanship, but there was something old school, slightly ponderous about it. Anderson has lightened Loewe, roughened it, added sensuality, sunlight, movement and humour. If there was a little seductive wildness in the flare of his handkerchief hems, it merely emphasised that Anderson has never been more in control. He goes from strength to strength." — Tim Blanks 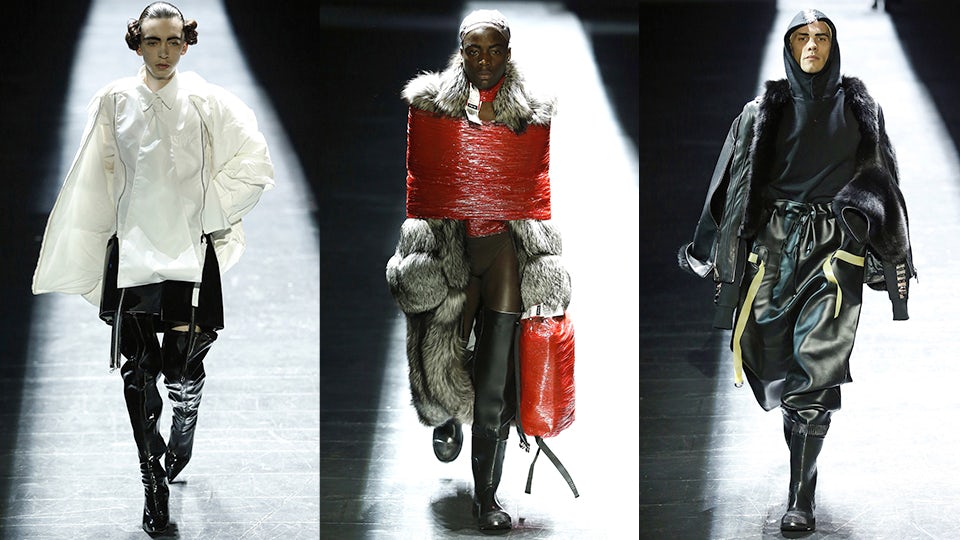 "Though Shayne Oliver’s new presentation for Hood by Air was actually his most disciplined to date — clotheswise at least — the song it sang was revolution, the French Revolution to be specific. There were big white poet shirts, outerwear sized like capes, torrents of pleats and latex ruffles that could be construed as contemporary takes on the garb that those aristos would have worn to the guillotine. Red saran wrap around the throat mimicked the gash left by the guillotine’s blade. If you accept that fashion mirrors wider concerns, then clearly a readjustment is on the way for everyone. The complex, ritualistic nature of his latest performance hinted at redemption through revolution. Oliver’s collaborations are an invaluable reminder of just how critical community is to creativity." — Tim Blanks 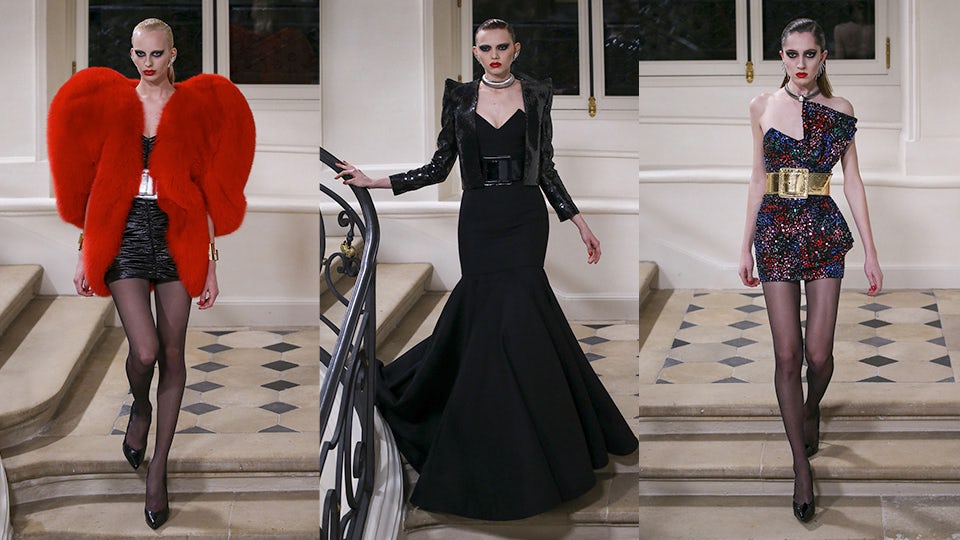 "Made at the reinstated couture ateliers in Paris and Angers, the Saint Laurent show was a maximal exercise in minimal form. The sculpted swoop of classic couture shapes meshed with abbreviated dresses, the fabrics a parade of paveed shine and lurex glitter. Le Smoking Classique asserted itself in a cropped jacket over a black sequinned jumpsuit. Slimane reconstituted the fabulous fur chubbies of YSL legend.  So were we witnessing the public debut of Slimane's own couture collection? As much as the event — and event it surely was — was cloaked in YSL mystique, an essential ambiguity still prevailed. Like it or not, this legend is still in the making." — Tim Blanks 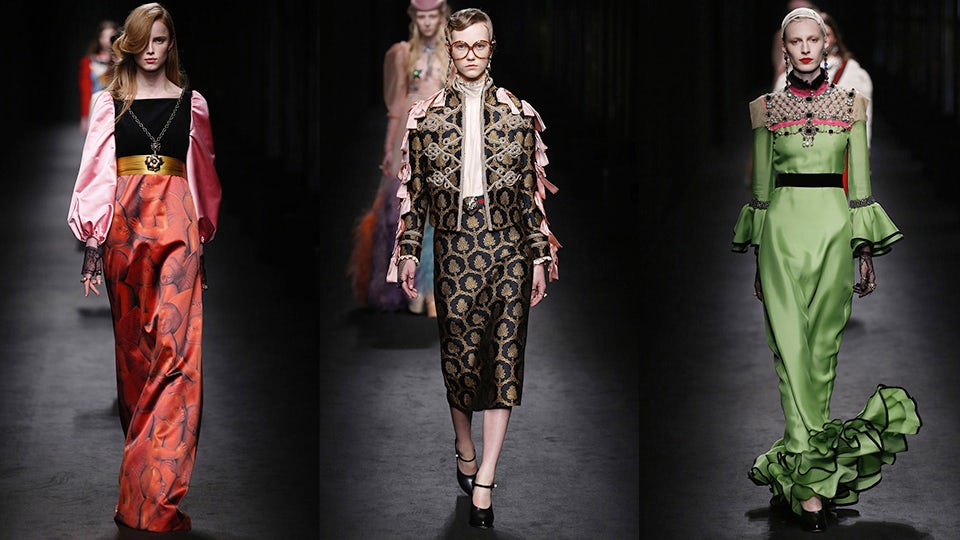 "Vertigo, "the feeling of losing your sense of self that you get when you look at art or something beautiful," as Michele put it. Case in point: Gucci’s Autumn/Winter 2016 collection. Michele’s subversion of "lady" dressing scaled new heights. Old Hollywood glamour collided with Gucci’s nu-glam in a manic mash-up of pattern and texture and extraordinary colours. All of that said, there was a surprising amount of clothing that will make Michele’s paymasters happy. Dissect it into tailoring, knitwear, lively jacquards, seductive embroideries, bombers, blazers, boots and bags, and you had yourself a whole gorgeous mess of items that will decontextualise and reactivate any tired old wardrobe." — Tim Blanks 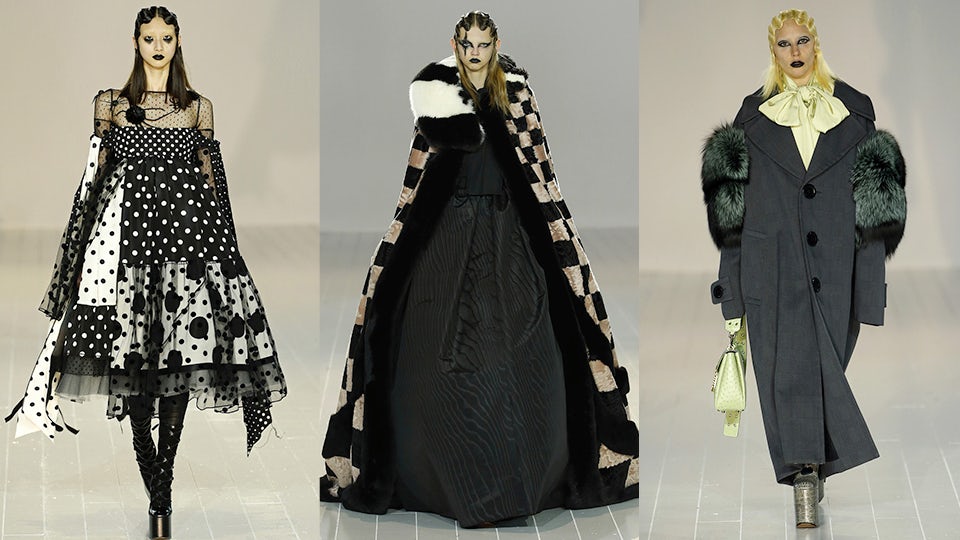 "The pleasurable sense of climax Marc Jacobs brought to the NYFW calendar was like our reward for the longeur of the often-frigid week. His shows are ten-minute shots of purest sui generis spectacle. If Spring was technicolor, Autumn/Winter was black & white. “We amped up the opulence,” Jacobs enthused. “Larger and larger. We’re doing a show! That’s what I love about fashion.” And each girl was a show unto herself, raised high on a pedestal of eight-inch platform shoes. The same exaggerated proportions carried over into what they were wearing. When a Gothic highschool Cinderella walked by in a supersized Bobcats baseball jacket and a skirt that was a massive dome of black PVC, you prayed her prince would come in one of Raf Simons’s equally gigantic letter sweaters." — Tim Blanks 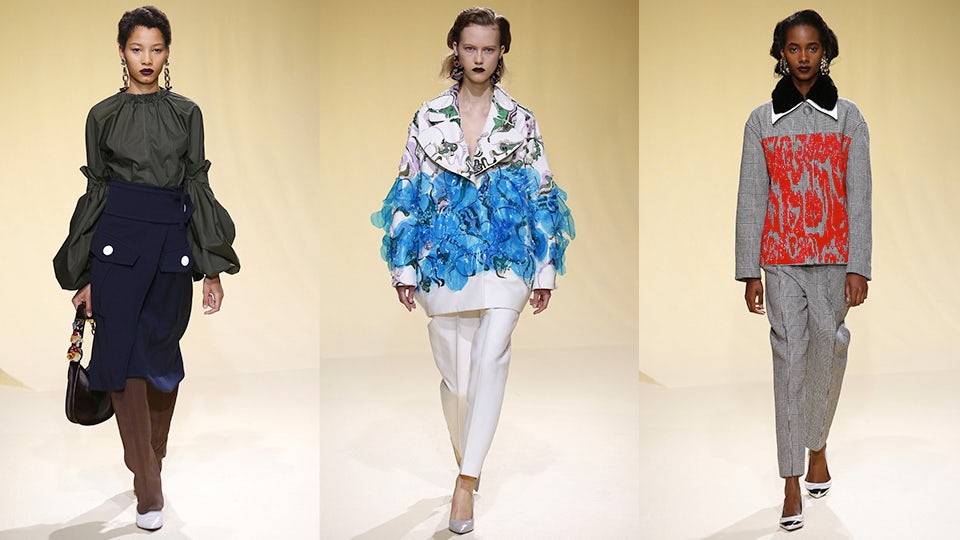 "This season, Consuelo Castiglioni struck a convincing balance between the familiar (the historical, even) and the not so, like the jacket and coat in a classic Prince of Wales check, bugle-beaded in an Ikat pattern (the same pattern appeared a few outfits later in fabric form). The hybrid result was quintessential Marni: m-odd-ern. From the moment fresh new face Charlee stepped on to the catwalk, the show hit a winning streak. And it stayed there, through a procession of looks that Consuelo Castiglioni called "new romantic.” It was proper romance too. Charlee wore high-waisted, wide-belted stirrup pants, billowing sleeves and a sculpted cape-like thing buttoned down the shoulder and tied in the back with a ribbon, all of which, coupled with her exquisite makeup and hair, made her look like a Daphne du Maurier heroine (Rebecca was, in fact, a reference for hairstylist Paul Hanlon)." — Tim Blanks 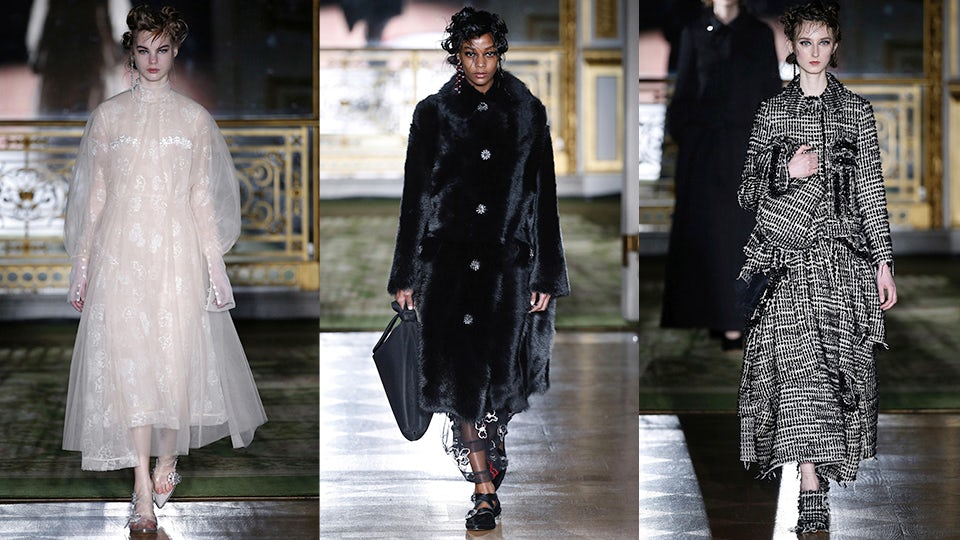 "Recent first time mother Simone Rocha said she’d been in “a funny state of mind” for the past three months. So if she offered up plenty of the dark romance that is a Rocha specialty, she also added what she called a “surgical” element. We’ll take her word for that, but the minute she said it, a surreal hospital drama took shape: matrons in black double-breasted coat dresses; an expectant mother wrapped in a big pink hospital robe; models swaddled tightly, like newborns; bright red earrings, dribbles of blood. “Falling apart at the seams,” Rocha wrote in her shownotes. But she did find respite with angelic dresses in sheer tulle, delicately embroidered. The same tulle was made into overdresses, the breasts highlighted — a little like primal fertility figures. That’s the Celt in Rocha. And perhaps it was that pagan heritage that gave this collection its fearlessness. Although there is nothing as primal as the act of giving birth." — Tim Blanks