In lieu of a designer-driven narrative, the latest Topshop collection seemed to propose ingredients for a multiplicity of consumer-generated stories. 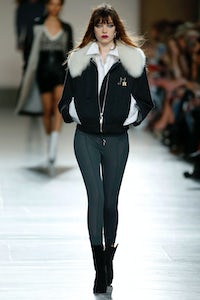 In lieu of a designer-driven narrative, the latest Topshop collection seemed to propose ingredients for a multiplicity of consumer-generated stories.

LONDON, United Kingdom — While most good fashion is still driven by strong artistic direction, these days no look is finished, final or total. Indeed, customers — more attuned to product than vision — are expected to freely mix and match, becoming the ultimate 'designer' themselves, speaking volumes on the waning power of Fashion with a capital F.

This state of affairs presents a perfect opportunity for high street brands like Topshop. The company would never dream of forcing its customers to submit to a totalizing vision. Instead, with its latest collection, it seemed to say: you can be a star, because this is about you.

The show notes spoke of rebels and taking to the stage — classic nods to individualism. (They also referenced Shakespeare, which proved weirdly coincidental as, later in the day, the bard was all over Johnny Coca's first collection for Mulberry.)

The mix of trends and influences was similar to last season: Gucci-esque, brown faux fur coats over dresses, lots of 1970s Saint Laurent by way of Hedi Slimane, still those white fuzzy jackets à la Louis Vuitton, and so on. There was also a sportiness in the mix with leggings set off against boxy jackets and coats. But the main vibe was mash up.

It made you think about what fashion is today. Some designers, like JW Anderson and Marc Jacobs, continue to affirm the power of the creator — someone who won't just leave things to consumers and, instead, bends reality to bring people over to his or her perspective, rather than adapting to the market. But then you look at Topshop's front row, including Lucky Blue Smith, Suki Waterhouse, Olivia Palermo, Jourdan Dunn, Karlie Kloss and Lara Stone, for a combined Instagram follower count of 12.3 million. Their message is also one of creation — self-creation — and in a way they are bending reality too. It is a strangely elitist and democratic message wrapped together. Still, it jives with the way clothes are seen today: ingredients in a story only you can tell. 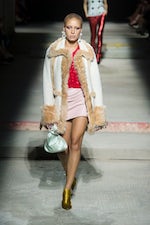 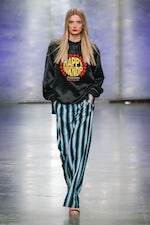 At Topshop: Utility vs Femininity 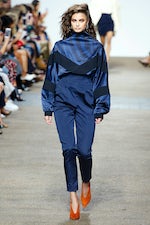 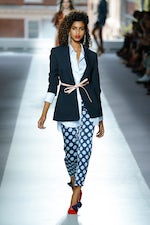 Topshop on the Pulse