Tradition as Salvation at Prada

Miuccia Prada turned her latest outing into a comprehensive and riveting education in the history of her house, juxtaposing graphics from previous collections and making mutant combinations. 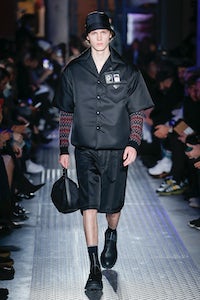 Tradition as Salvation at Prada

Miuccia Prada turned her latest outing into a comprehensive and riveting education in the history of her house, juxtaposing graphics from previous collections and making mutant combinations.

MILAN, Italy— The Prada set was a warehouse stacked high with crates, like the final scene of "Raiders of the Lost Ark."

"There are strange things happening in those boxes," Miuccia Prada mused. "Strange animals, strange machines, strange preparations for some strange transformation." Like an entire civilisation in cold storage. Or like an Amazon warehouse, as captured by Andreas Gursky in a recent numbing panorama. All human endeavour distilled into a brown cardboard box, borne by drone to your address. The show invitation was a mini-flatpack version of just such a box.

Last season, Miuccia was energised by a simmering anger. This season, that idealistic energy initially seemed as though it had surrendered to a dystopian what’s-the-point?. The designer asked a handful of her favourite architects to re-interpret black nylon, the ground zero of the Prada phenomenon, and what they came back with amplified the initial end-of-days impression. Instead of the classic backpack, Rem Koolhaas made a front-pack, perfect for absorbing an apocalyptic wallop. Konstantin Grcic made an apron and a hood (why was I thinking Cormac McCarthy?). Herzog & de Meuron envisaged a world in which language had lost its power, where words were mere decoration. The models sported corporate IDs on their industrial nylon ensembles. “We are all controlled,” Miuccia declared. ‘We think we’re free, but we’re a kind of species.” Another brick in the wall? Was that Pink Floyd on Frederic Sanchez’s soundtrack?

We are a species, of course, just one that has profound difficulty slotting itself into the continuum of life that otherwise dictates the rhythm of the planet on which we evolved. It was riveting watching the way Miuccia built a collection of clothing on such a notion, juxtaposing graphics from previous collections, making mutant combinations, like a banana-print shirt laid over a fairisle sweater. The bananas were licked by the flames of another Prada print and — apologies in advance for the quantum leap — all I could think about was Hawaii’s false alarm on Saturday. It was, of course, pure coincidence that Miuccia reanimated yet another print from years ago of a post-nuclear Honolulu landscape, but I will always give her credit for a rare prescience in fashion.

Maybe the prescience is pragmatism. Either way, she persuasively nullified that initial negativity when she said that "intelligence, humanity, generosity and possibly love" would save the world. But note that she didn’t mention lovey-dovey beauty. That wasn’t this collection. If Amazon is the contemporary repository of human knowledge, the 21st century simulacrum of the Great Library of Alexandria, Miuccia chose to turn her latest outing into a comprehensive education in the history of her house: from the uniformity of the black nylon, puffed into exaggerated power silhouettes, through the myriad of prints, into colour and finally the reassuring classicism of tailoring in camel and charcoal grey. From hard to soft. Tradition as salvation…it was a potent closer. And Michael Nyman’s lyrical theme from "The Piano" played as an additional acknowledgment of the profound truth that beauty can, in fact, offer succour at the cold, hard, bitter end.