The gang mentality, undone melancholy and the power of a single idea were on display at the Paris men's shows.

The gang mentality, undone melancholy and the power of a single idea were on display at the Paris men's shows.

PARIS, France — The gang mentality which is so integral to the way most brands operate today — creating a sense of belonging in order to urge customers to the shop — was apparent in the Kenzo show yesterday, a mix of menswear and a consistent chunk of womenswear (the brand's pre-collection, for the records).

"We sent little cliques of men and women down the runway, trying to recreate the inclusive ethos of some seminal moments in New York's 1990s nightlife," explained creative directors Humberto Leon and Carol Lim. The ethos, and certainly the looks. "In each collection,” — they added — “we try to explore a streak of Kenzo Takada's heritage. This time we looked at Mr Takada in his early years, when he was showing in the Big Apple and enjoying local clubs such as Studio 54." 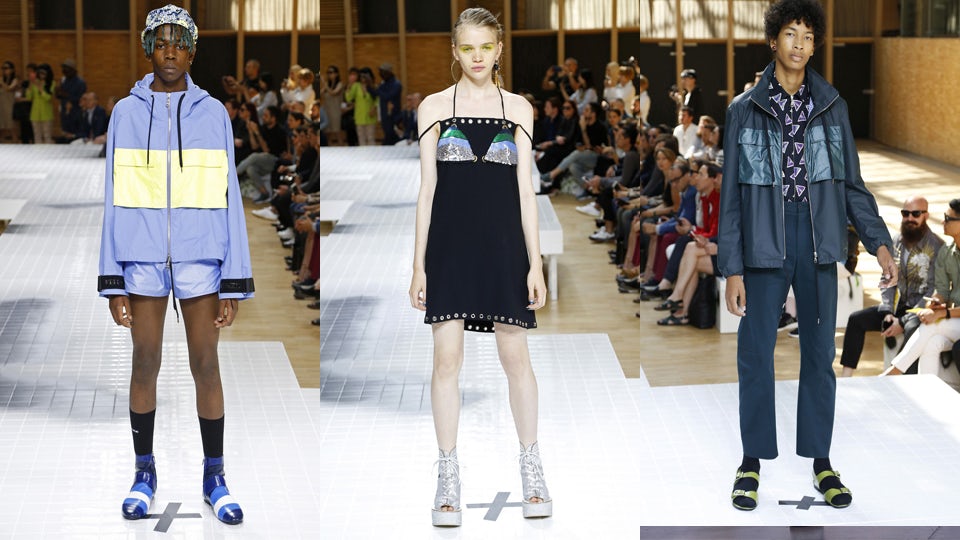 Enough with conceptual explanations and brand consistency. The collection was a bold mix of urban staples, reconfigured streetwear and boxy, oversized tailoring in odd proportions, accessorised to an nth with caps, stripy socks, and glittery platforms. It was visually as lysergic as possible, and definitely upbeat and joyous. Yet it lacked clarity, maybe because of the forcibly messy styling, which made pieces disappear in a jumble of this and that. Their intentions, however, were clear and commendable (even though a groupage of street-cast models is not necessarily a clique). Creating a sense of belonging demands a bit more truthfulness, or probably more spontaneity in the looks.
a
Another label, another tribe: the Balmain posse of muscled-up ubermensch is certainly no less hedonist. They are not clubbers, though, but flashy and wealthy jet-setters that end up on the world's most beautiful islands and beaches, and Instagram for the joy and envy of their followers. This is more or less the scenario Olivier Rousteing conjured in the show notes, which translated into the usual galore of sculptural tailoring, sexy militarism and overpowering decoration. 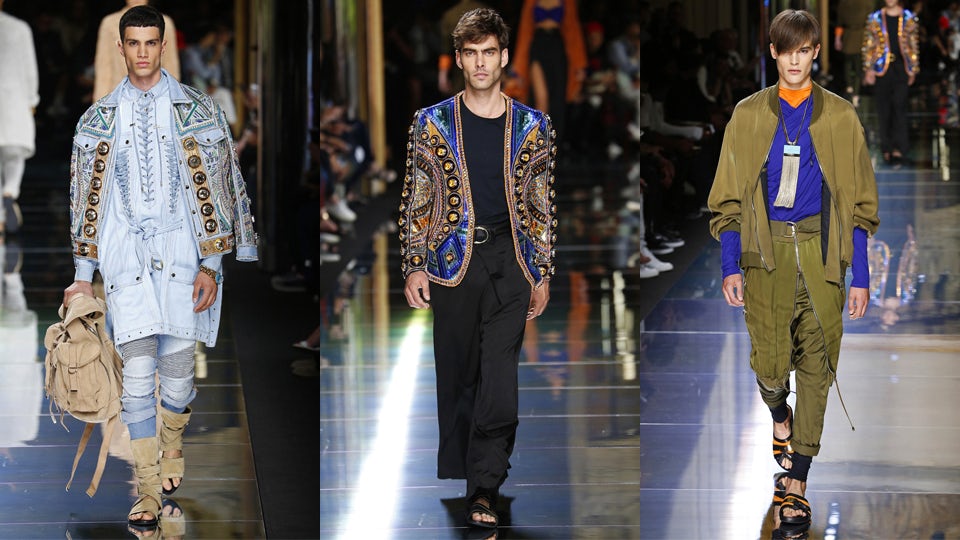 Faithful to the beach mood, the collection looked a lot lighter than usual: airy knits in colourful stripes were featured abundantly, together with sun-bleached denim, ponchos and an avalanche of embroideries. One might ask where on earth does a man like this live? He seems like an oddity left floating around since the 80s — but the screaming fans outside and the star-studded audience was proof that there is ample room for Balmain's vision in the world.

There was a palpable melancholy to the Maison Margiela show, and not just because of the bluesy soundtrack and the enchanting location — full of marble busts. The undone quality which permeated everything looked like a reflection on time: its passing, and the effect that has on objects and lives. Hence, outfits looked like they were half finished, or peeling off; snap buttons in place of stitches allowed for shirts to be completely taken apart. 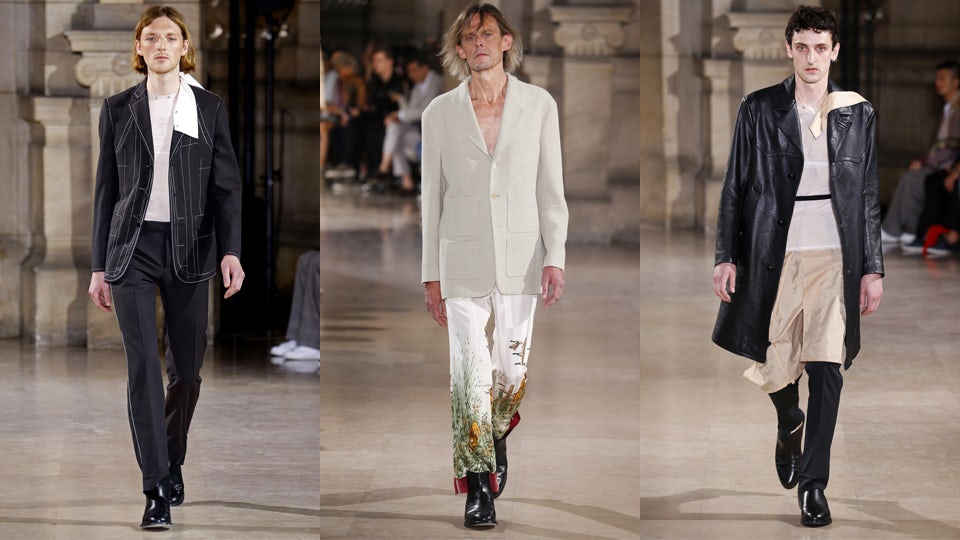 It made for a remarkable outing which also highlighted Margiela's double faced identity at the moment. In fact, while John Galliano has set a wholly new and entirely personal template in the womenswear, the menswear keeps a stronger bond with Martin, the originator. At this point, this must be an intentional business plan, and somehow it is so contradictory it is fascinating, or just puzzling. 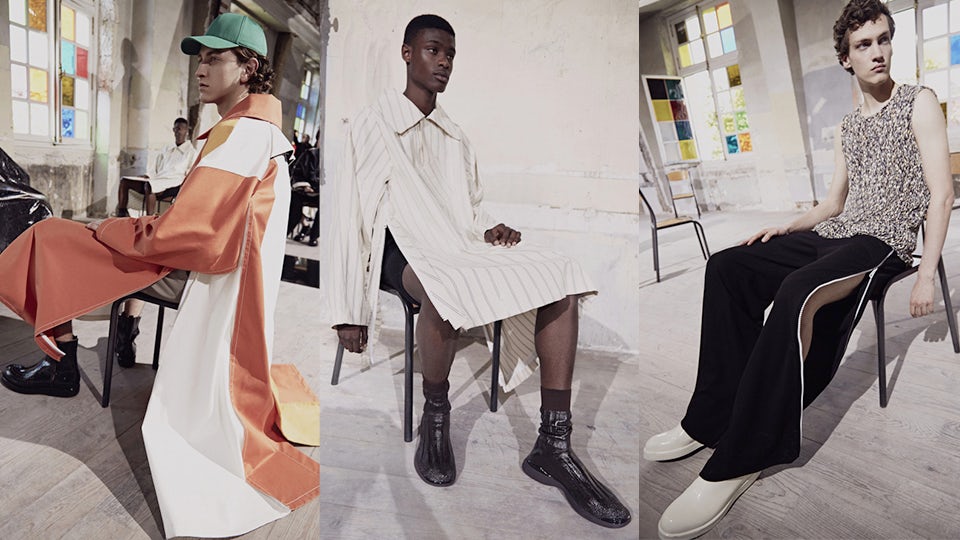 Never underestimate the clarity and power of a single idea in our age of chaotic fashions. That's what Jonny Johanson did at Acne Studios. His focus this season? Swedish summer — read rainy and damp — and tents. The brief translated into a compact offer of a-line raincoats, A-line-to-the-knee anoraks and stripy blousons in coated, treated, laminated fabrications, invariably worn with shorts. The result was convincing, not least because it was devoid of the fuss and the bizarre diversions that has given Acne menswear such an odd vibe in the past. 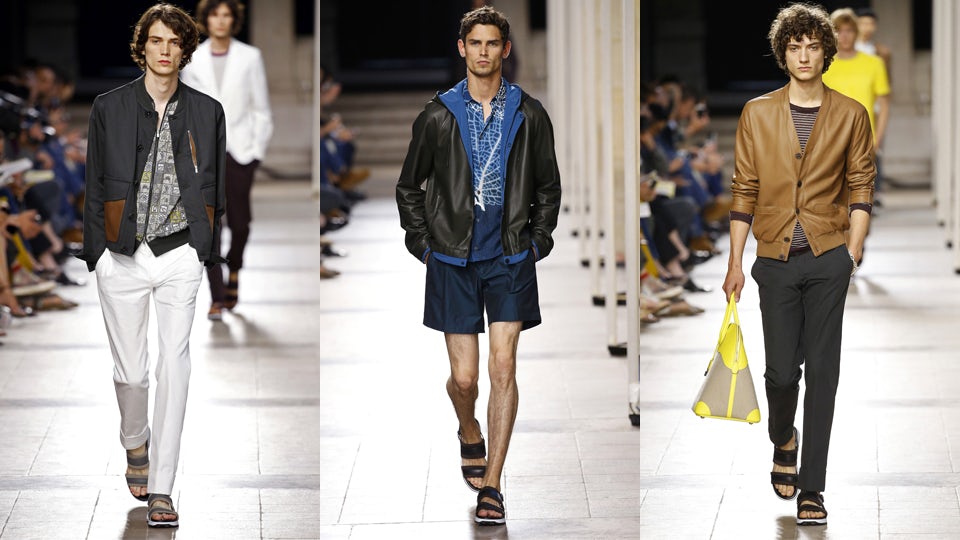 An Hermés show can be a fitting metaphor for the slow evolution of menswear — or certain areas of it. More or less, season after season, you have the impression of seeing the same collection, give or take a colour or a detail. Men's artistic director Véronique Nichanian is currently into acidic yellow, purple and tie-dye, which made for a jolly and youthful offer of slim tailoring and slimmer leisurewear. Maybe too slim, in fact: given the current interest in bigger shapes, and Hermes' status as the temple of subtle discretion, it would have been stimulating to see Nichanian testing new silhouettes, in place of adding new surfaces to familiar ones. 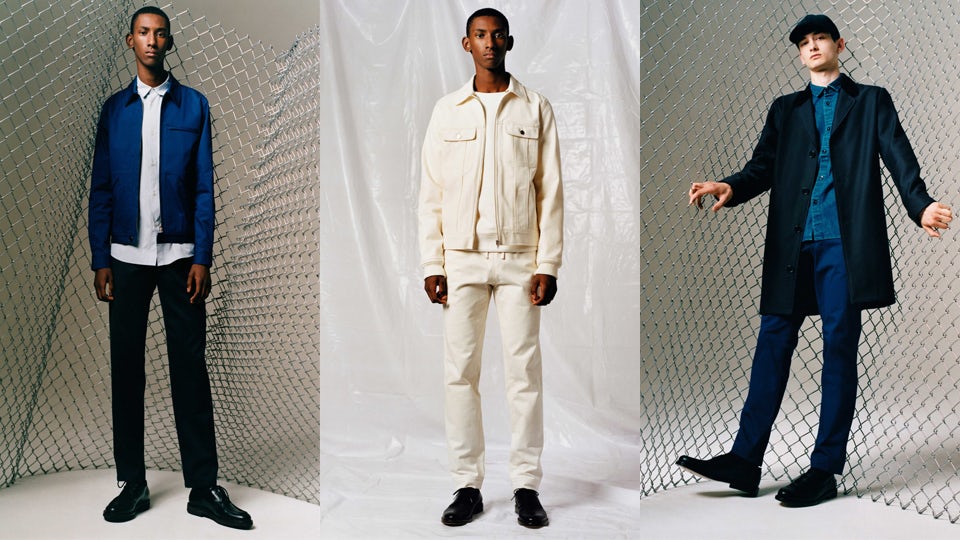 At A.P.C., Jean Touitou continues morphing and expanding the repertoire of his forte — clean, pragmatic dressing. This season he moved away from French chic to cater to urban vibes with workwear nods. It translated into a modular wardrobe of glorified post-basics in singular colours that looked fresh and tempting. 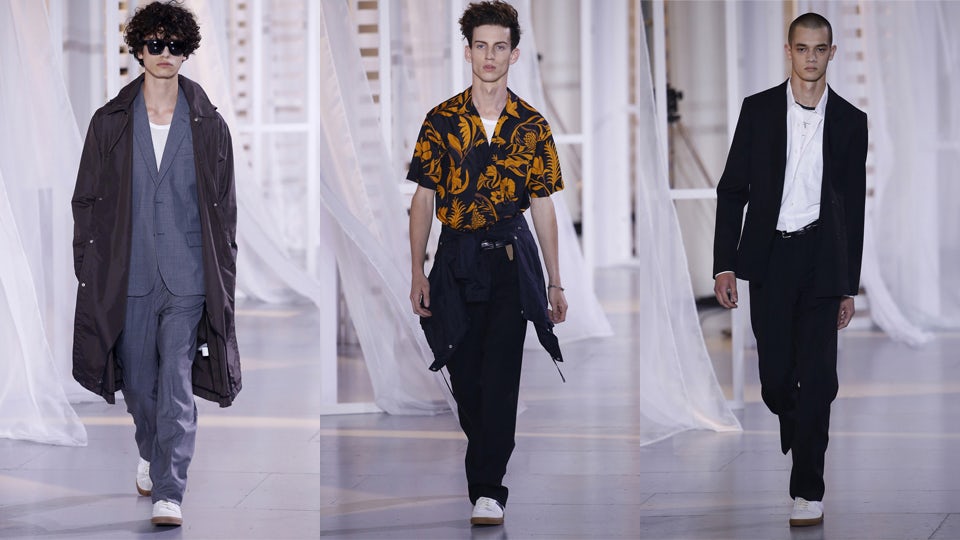 In a very similar vein moves Alexander Mattiussi of Ami. His interest as a designer is focused on product, more than image-making: he endlessly works on rethought staples that can be mixed in different ways and exude a quintessentially Parisian nonchalance. The satin trenchcoats, checked suits and printed k-ways he presented yesterday looked like Sunday best leisurewear: normal, but somehow special. Nothing to move the fashion horizon forward, but nice.