If you needed a collection of clothing that would justify Armani’s continued existence on Planet Fashion, this was it. 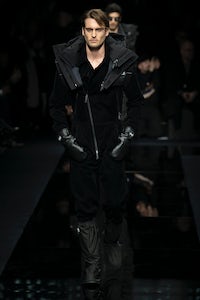 If you needed a collection of clothing that would justify Armani’s continued existence on Planet Fashion, this was it.

MILAN, Italy — Screens played snowstorms. The runway revolved around an ocean of icy perspex. Was Giorgio Armani playing an environmental endgame, or was he simply creating an appropriate context for NEVE, the capsule collection of high-performance winterwear that opened his show on Monday? As much as some of the guys looked like they were kitted out for snowboarding, there were others who were totally prepped for The Day After Tomorrow. If you were so inclined, you might have been wondering where Armani’s usual menswear would fit into the doomsday scenario he was hinting at.

Maybe he was wondering the same thing. If you needed a collection of clothing that would justify Armani’s continued existence on Planet Fashion, this was it. It wasn’t simply that the focus was tight (more so than usual), or that Armani efficiently ticked off his trademarks. When he called his show Tactile Impressions, he was reminding us that his fabrics have always begged a stroke. But this time, the seduction was turbo-driven. The spine of the collection was its coats. Most of them had what could pass for a portrait neckline in a collection of womenswear. It had the same effect in menswear: highlighting the beauty of the wearer. Movie star glamour was baby Giorgio’s fantasy fuel. He’s felt that fascination ever since. When he successfully connects with it, he makes beautiful clothes.

And that’s what happened here. I’d pick the sinuous, soft-collared coats, or the big, shawl-collared, djellaba-striped versions; the khaki green velvets; the Nehru jackets paired with baggy-ish ankle-buttoned trousers (not remotely Ali Baba, however much it sounds that way). All of them glossed with the soft, unstructured ambiguity that fuelled Armani’s original sartorial revolution. But there was also a tougher little something, like the long suede gilet worn under an overcoat, or the navy military-influenced looks.

It was never all going to work in a presentation this size. Karl Lagerfeld had the same issue at Chanel. The handful of velvet-slippered eveningwear that closed the show looked kind of pinched and fussy after everything that had come before. But, really, for Armani to be coming up with such a collection in the second half of his ninth decade was a solid reason to salute fashion as at least some of us know it and still love it.